Here in Korea, we have a friend from France named Louis. Sometimes, Louis appears at our door with interesting surprises…mostly of the gastronomic variety. Once, it was dehydrated morels that were promptly cooked up with chicken and cream. Another time, it was a tin of decadent foie gras which we consumed tout suite.

This time around, the news was of a chance meeting with the Dessert Chef for Pierre Gagnaire à Séoul – a place I had long wanted to visit, but deemed too “expensive.” We didn’t think much of it, but Louis it seemed, had other plans.

Because a few weeks later, while we were in the Maldives on our babymoon, a message arrived out of the blue, that reservations had been made for us at the 3 Michelin chef starred restaurant. Details were a bit fuzzy, but the words discount and extra desserts still managed to break their way through my beach haze.

“Reservations have already been made for lunch…but I can cancel if you don’t want to go. Oh, and by the way, Pierre Gagnaire will be visiting, so there might be some special things…” said Louis.

And so, not a week after we returned home, we found ourselves staring out at a view of Namsan and the Seoul Tower from the 35th floor of the Lotte Hotel, waiting for the first of what turn out to be, an afternoon of complete and utter gluttony.

The chef is in town

The view from our table

Seoul from high above

Since I’m not a chef or real foodie, rather than bore you with attempts at describing food that I simply don’t have the knowledge or words to describe properly, I’ll make a few comments, but mostly just let the pictures do the talking.

Amuse Bouche
Any gourmet meal starts with an Amuse Bouche, and at Pierre Gagnaire, you build each one individually. Each spoon corresponds with 2 items on the plate, and is eaten all at once. There was lobster, and truffle salt, and other things I can’t really remember, a month after our meal, but suffice it to say, that even though I didn’t love every morsel, each was unique, flavourful and an experience in itself.

And don’t even talk to me about the bread. Which was divine, varied and never-ending. I shoulda had them pack up what I didn’t eat, but somehow it didn’t seem quite appropriate to ask for a take-out bag there. 😉
.

Amuse bouche waiting to be combined

Cocktail de poche / Pocket cocktail
This was the only course where I was disappointed, but only by 1 of the items. Drowning at the bottom of the martini glass was a single dumpling in some kind of strange, sour, bitter tasting liquid. Definitely the lowlight of the meal, but truly the only real disappointment.

La Mer / The Sea
For the Sea course, we received 2 different plates…an advantage of visiting when the chef is in town, I suppose. 🙂 Both dishes were delicious, but the first dish of squid ink rice, covered with big chunks of langoustine and a creamy sauce was one of my favourite parts of the entire meal.

La Terre / The Land
Perfectly cooked premium Korean beef with mortadella and spaetzle, was the absolute highlight of the meal. ‘Nuff said.

Le dessert de Pierre Gagnaire (or where the gluttony really took hold)
So, remember the Dessert Chef? Because of him, we received not the usual 2 desserts, but a grand total of 5 desserts! Each was decadent, rich and exquisite looking. Despite the fact that my stomach was already stretched beyond comfort (never mind the baby in there), I still managed to consume every last bite of these gorgeous desserts. It would’ve been a tragedy not to.

Café et petits fours
Of course, the sweets didn’t end with our 5 dessert debauchery. There was still a plate of super concentrated petits fours to finish things off. A mouthful of marshmellow, jelly and an ultra delicious taste of white chocolate and I was completely done.

…but not before we got a little behind the scenes tour of the rest of the restaurant, and chatted with the Chef himself, Pierre Gagnaire.

The super clean kitchen and some of that delicious meat

Apparently, the most expensive champagne in the world

Pierre’s Bar, where Putin hung out when he was in Seoul

We’ll just take one of these home 🙂

Have you ever dined at the restaurant of a Michelin starred chef? Was it everything you expected and more? Tell us all about it in the comments below. We’d love to hear from you! 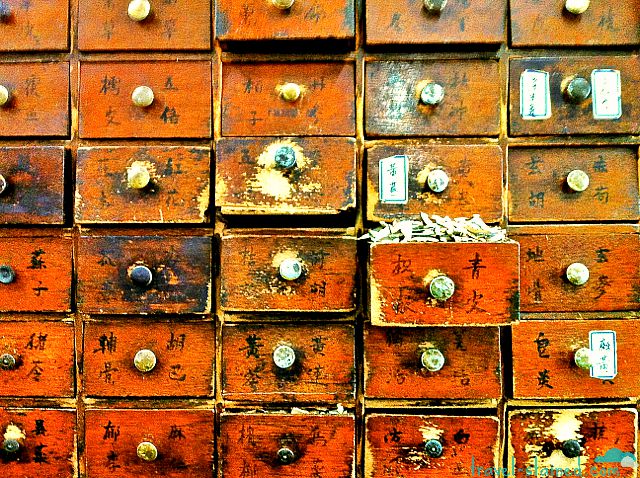