Overall
We loved Colombia so much that we returned for a second round after we completed the Inca Trail in Peru. On our first trip, we’d spent our time in Bogota and the surrounding area, so for this portion of the trip, we decided to concentrate our energies on the northern Caribbean coast of Colombia. After the challenge of trekking the Inca Trail, we figured a little beach time definitely couldn’t hurt.

Agri had always dreamed of visiting magnificent Cartagena, so that’s where we began our exploration of Colombia’s hot and humid Northern region. I have to admit, it surprised us a bit. Being the Caribbean Coast, we’d assumed that there’d be long stretches of white, sandy beaches and clear turquoise waters, and it’s simply not the case (at least where we went).

Don’t get me wrong, the coastline is STILL beautiful, but not in a picture postcard kind of way. The beaches are rugged and untouched, sometimes with nary a footprint upon them, with deep blue waters that sometimes must be battled, instead of bathed in.

Cartagena, with it’s lively Afro-Latino cultural mix and sultry weather, was so different from what we’d experienced in Central Colombia, that it felt like another country. Heck, it felt like a different planet! 😉

And that’s the beauty of Colombia. It’s regions are so varied, with vast cultural differences, different landscapes and even different cuisines, that it never gets boring. Add to that, the fact that it’s people are so lovely, and it’s no surprise that so many travelers go back to Colombia time and time again. We did.

What We Did
After landing in Bogota, we connected immediately onwards to Cartagena, where we spent 5 full days walking around and taking in the Old City. There was a beach close by, but at a glance, we could see that the sand was gravelly and the water murky, so we skipped it completely. In any case, you don’t go to Cartagena for the beach, you go to Cartagena to take in the marvelous colonial architecture, listen to salsa and drink rum.

After we’d drunk in enough of Cartagena’s beauty (and multiple cups of delicious Juan Valdez Colombian coffee), we headed east towards the small city of Santa Marta. Originally, we’d planned on using Santa Marta as a base for exploring Tayrona National Park and the surrounding area, but after the touristy busy-ness of Cartagena, we opted instead to settle in the small fishing village of Taganga, just 10 minutes further along the road by bus.

The Quebrada Valencia in the Sierra Nevadas

Our intention was to relax in Taganga for the rest of our time in Colombia, but our old friend, Felipe from La Juanita Guatavita, showed up and pulled us into a few new adventures. With him as our guide, we visited the gorgeous Quebrada de Valencia, a stunning waterfall in the middle of the Colombian rainforest, and a spent a few days totally off the grid at a coconut plantation by the sea.

When our time in Colombia was up, we took a local bus from the tiny town of Palomino, back to Santa Marta, and caught a flight back to Bogota.

Costs
I covered our overall costs for Colombia in The Breakdown: Colombia Round 1, but to re-cap, we spent an average of $89.74, over 19 days.

Of those 19 days, 9 were spent on the Caribbean Coast and 10 in Bogota and the surrounding areas. Cartagena was, without a doubt, the most expensive place we visited in Colombia. Not surprising, given it’s huge popularity. It was honestly, the only place in Colombia that felt ‘touristy,” and of course, had the price tags to match.

Accommodation inside the Old City Walls were out of our budget, but we were able to find a decent, private room for $58/night by staying in the Getsemani neighbourhood, outside of the Old City Walls. Still, this ate into our $100/day budget considerably. Restaurants in Cartagena weren’t much cheaper, and a few cocktails and cover charge at Cafe del Mar on the Wall cost us 70,000COP or $40.

OK, so basically, it was next to impossible for us to stay within a $100/day budget in Cartagena. It might be possible by sleeping in dorms and eating food outside of the Old City Walls, but for us, the whole point of being in Cartagena was to experience the glory of the Old City. To enjoy this fully, required some spending on our part.

Fortunately, when we left Cartagena and headed west, our costs went way down. The cost of the bus doesn’t change, no matter how touristy the region, and by the time we reached Taganga, we were firmly back in backpacker ghetto territory. There were lots of options for accommodation and plenty of dining options within our budget.

We actually ended up paying for accommodation TWICE on one of our nights in the northern region of Colombia, because we decided to leave our already paid for hostel in Taganga to follow Felipe towards destinations unknown. Fortunately, the beach cabanas we stayed in cost just 36,000COP or $20/night.

Humble Accommodation at the Coconut Plantation

By the time we reached the coconut plantation, our costs plunged even more, and we spent barely $50/day for food and accommodation. Mind you, we were sleeping in the open air, had no electricity, ate fried fish pretty much everyday and bathed in a freshwater lagoon.

Details can be found here on the Budget Your Trip website.

Food and Drink
As a world class tourist destination, Cartagena had a huge variety of dining options available. Everything was on offer, from ceviche to sushi. Not wanting to sully our tastebud’s memory of the fantastic ceviche we’d had in Peru, we stayed far away from it (and the sushi too), but we did venture into a ‘Spanish’ restaurant for some seafood paella. It was disappointingly and decidedly average, despite the hefty price tag. 🙁

And while I can’t speak for every restaurant in the Old City of Cartagena (since we obviously didn’t eat in every one of them), I have to say that nothing we ate set off fireworks in the mouth. Food was generally expensive and just average in taste.

On our last night however, we had an amazing African-Spanish fusion seafood dish in Getsemani for a fraction of the price. Clearly this is where we should’ve been eating all along!

Once we left the fantasyland of Cartagena, it was back to more traditional Colombian fare, though much more seafood based than what we were used to in the Central region. Pan-fried whole fish, smashed plantains and salads became the norm once again. Simple and satisfying.

Travel Tip
We saved a ton of time and money by booking one way flights. The first was from Bogota to Cartagena, and the second was from Santa Marta to Bogota. The bus ride between Cartagena and Santa Marta is only 3 hours, but it was 3 hours we used to our full advantage.

If we were flying out of Cartagena, we would’ve had to leave Lucas’ coconut plantation one night earlier, in order to ensure that we wouldn’t miss our flight back to Bogota. This would’ve entailed checking into another hotel and making a transfer to the airport in Cartagena and again in Bogota.

Instead, we were able to wake up the morning of our flight back and do all our traveling in one day, and make just 1 transfer to the airport. The best part? The cost to book two 1 way flights was identical to booking a round-trip. 🙂

Attraction Tip
Go to Lucas’ Coconut Plantation if you can find it. Granted, this could be a bit difficult, because his place isn’t in any guidebook, and I’d venture to say, on any map either. Of course, that’s what makes his place so amazing. It’s true peace away from the tourist hordes and a totally authentic Colombian experience.

I’ll give you a hint though…the turn-off to this paradise was about a 10 minute drive from the tiny town of Palomino in the La Guajira region. Good luck! 🙂

Following the Colombians to Destinations Unknown

When in Colombia
Follow the Colombians! Of course, you have to follow the right Colombians. Don’t follow any Pablo Escobar types around the rainforest or anything. Look for someone with great energy and an open heart (honestly, in Colombia, it’s much easier than it sounds).

Felipe was the great energy Colombian we followed, and because of him we were able to attend an authentic ayahuasca ceremony on the outskirts of Bogota, and discover parts of the country that we would never have known about otherwise. Travel at it’s best! 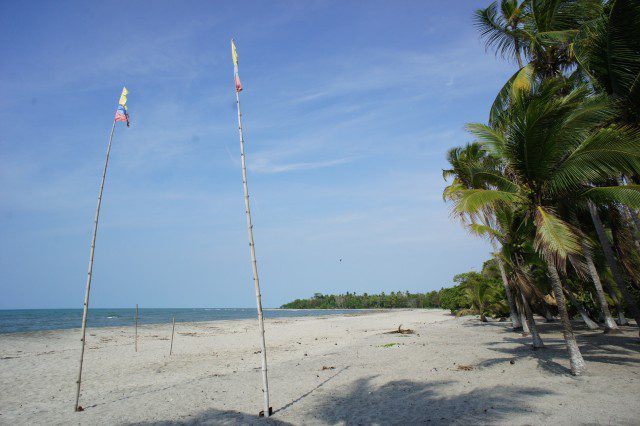