Ayahuasca Ceremony in Colombia | What to Expect

It’s just our fifth night in Colombia. We’re crammed onto a dilapidated bus that’s zig-zagging up the side of a curving mountain, on the south side of Bogota. Our travel companions are the Colombian, Felipe, who, with his brother Nico, runs La Juanita Guatavita, and Griselda from Spain.

It’s a night of firsts. We’ve all just met for the first time, and for all but Felipe, it’s the first ayahuasca ceremony with the Amazonian medicine plant.

“Ayahuasca Vine” by Apollo is licensed under CC BY 2.0

That we’ve ended up on this bus at all, is just a teensy bit magical in itself. Because we haven’t been actively seeking out an ayahuasca ceremony. Sure, we’re curious about it, but not now…when we’ve just landed and everything is foreign and we feel green and vulnerable.

It starts when I receive an email from Felipe, telling me that he’s attending an ayahuasca ceremony the night before we are due to visit La Juanita. Are we interested in this kind of medicine? Would we like to go with him? I am nervous, but curious enough I suppose, but Agri, as usual, is all in, all the way.

That we should be interested in such a thing, is no surprise. Spiritual seeking has become a way of being. There have been Buddhist meditation retreats in Thailand and Korea, Enlightened Warrior Camp in the United States, and Network Spinal entrainments all over the world. Why not an ayahuasca ceremony in South America?

Traditionally, ayahuasca was used by different tribes in the Amazon Rainforests, for divination, folk-medicine and other shamanic purposes. The shamans of the time, believed that the vine, contained “spirits” that would assist them in accessing other dimensions, and in healing the body, mind and soul. The physical cleansing or purification process usually occurs through a process of purging or vomiting, hence ayahuasca’s other name, “la purga,” and there are a multitude of other reported emotional and spiritual benefits.

What to expect during an Ayahuasca Ceremony

Of course, we are not in the middle of the Amazonian jungle about to embark on our first ayahuasca ceremony. We are in the Taita’s house on the outskirts of Bogota, Colombia, with trucks rumbling by and horns honking incessantly. Still, the Taita is the real deal. He was the first indigenous representative for Colombia in the United Nations, and was, the very next week, headed for a meeting with the Bolivian President, Evo Morales (he himself, the first indigenous president of any South American country ever).

After a few hours of rest, the Taita dresses in his traditional clothing and we make our way towards the small fire in the middle of the room. He talks about his recent trip to Japan and the need for all of us to have some element of spirituality in our lives. Of course, this is all in Spanish, so I don’t really get all of it…just the parts that are translated to me. With a final command to “poo, vomit and vision a lot,” the Taita, moves to the side of the room and begins to prepare the ayahuasca brew.

He calls out “Korea” and I know it is my turn. He knows I am nervous, so he calls everyone to stand around me and hold space, while I drink. I look at the greenish-hued brew with trepidation, then decide to just pour it down my throat before I can think about it too much and psyche myself out. And the taste is not that bad, despite all of the horrifying reports I have read online. The Taita has a cup with me, and we clink glasses as though we are celebrating some happy event. I later find out that the Taita rarely drinks, and that he has done this to help me feel more comfortable. He must really be able to feel how scared I am!

Ten minutes later, our entire group of 8 has drunk the bitter medicine one by one, and we sit and wait. Thirty minutes later, a girl quietly moves to the side of the room, where the temporarily empty puke bins are, and begins wretching and vomiting violently. I look on with more than a little fear and wonder when my time will come.

As it turns out, I have a long and challenging night ahead of me…

A friend from my vision

I close my eyes. The creatures are dancing in rows, synchronized, one row going left, the other one right, left, right, left, just like in a video game. They’re golden, blue, tongues out, arms like an Egyptian. Wow, I’m feeling it. Maybe I should go lie down. I get up, I hit the floor. Image, image, I’m peeing, flash, flash, more images, peeing feels so good, my grandfather, my uncle, what’s that, music??? Oh the music sounds so nice, the smoke blowing in my face, the drums, the seashells, peeing feels so nice, so liberating. Oh my God I’m peeing my pants, WAKE UP, you’re peeing your pants.

Consciousness returns slowly, I realize I am in Colombia, at the Taita’s house, people around me, I’m wet as a frog. I open my eyes, I see Griselda, Felipe, the Taita hovering over me, playing the beautiful instruments, a pool of urine on the floor. I’m so embarrassed. Everyone is staring at me, I manage to say a few words: I think I peed my pants. It’s ok says Griselda, as if she were my mother and I, a 5 year old child. Her understanding gives me comfort. I must clean up, no says the Taita, just relax, it’s perfectly normal it happens sometimes. Maybe perfectly normal in the Jungle, but a good 20 seconds of urine in the middle of the living room, pretty shameful by my standards. It stinks. Nobody seems to notice. Perhaps everyone is dealing with their own visions.

I get up, go to the bathroom, toss my underwear in the garbage, pants fully wet. I get lots of toilet paper, go back to dry the pool but the Taita stops me once more. Don’t worry about it, my wife will clean it tomorrow. It’s 2 am, a long way from tomorrow. I don’t know how to feel about it. I can either resist or accept what happened, move on, and enjoy the rest of the night. I chose the latter. It’s done.

We’ve been here only a few hours. Rested for  while, gotten to know each other, listened to a speech by the Taita on his recent experience in Japan. Humor, concerns, observations about a land so far away from the suburbs of Bogota, a different planet. And then, one by one, we’re summoned to take the strange tasting potion. Suma Pinta! I remember the Taita wishing us good visions and lots of puking and shitting. That’s different. Suma Pinta!

We sit by the fire. Some are silent, dealing with the own creatures in their head. Some are puking, plenty of buckets around. Some are pooing, lots of that tonight. I chat with David, turns out he teaches law in University, Indigenous Rights law. Huh. He’s working on legislation with the government. Interesting.

Round two comes around. The Taita calls for the Madrepatria. Who? Ah, Griselda, the motherland, she’s from Spain, an original Spaniard. She goes for round two. Then Korea, my wife, Felipe, and most of us, one by one.

I’ve lost the visions since the incident. I hope this time around the elixir will allow the visions to resume. We go back to the fire. The Taita playing the indigenous flute and the seashell organ, Felipe the drum, it sounds so beautiful. I can’t sit up straight. I lie down, my bottom half off the mat so I don’t wet it.

It’s light outside. The Taita’s wife is up. The pool of urine cleaned. She’s made chicken soup. Tastes like heaven. I have no change of pants, I squat over the fire, still wet.

I’d heard so much about Ayahuasca. That you connect to the divine, the spirit, Pachamama (Mother Earth). I went in without any expectations, to allow myself to go wherever I needed to. Not sure what I got out of this. Maybe you just go within, and that before you can connect to a deeper level, you need to face your own darkest corners. Maybe wetting myself was what I needed to clear my issues of shame, a big one for me. The images of my male role models, my grandpa, my uncle, what do they mean? Where is my father? MIA again? Perhaps everything would’ve been more clear had I stayed on that beautiful journey I was in, had I not realized I was wetting myself. Or is it as the Taita says, that the potion plants a seed, a seed that may flourish that night or in due time, running it’s course…

The morning after ayahuasca

We say our goodbyes, take a few remembrance photos, not that we’d forget. We’ve had a great night. A long, draining night. Off to the peace and quiet of the farm. La Juanita, here we come!

Chilling out before our night of ayahuasca

When I return from the bathroom, the Bear is lying prone on the floor. Griselda and Felipe seem to be watching over him, and the Taita is singing icaros and blowing incense smoke over his body. The music is haunting and beautiful to listen to, but it’s as though I’ve transited through a wormhole (yes, a wormhole located in the bathroom) and returned to a world completely different from the one I left not moments ago.

After a few minutes, Bear sits up and mumbles something, which sounds to me, like, “I hit my head.” What he’s actually said, not without a little wonder, is “I peed my pants.”

As it turns out, he DID hit his head. The next day, when the cobwebs of the night before have cleared from our minds, we find out from Griselda that Agri fell back suddenly, his eyes rolling up into the back of his head, he bumped his head 3 times, and well…you know the rest.

And I missed the whole thing.

Which pretty much sums up my entire ayahuasca experience. No colourful visions. No startling revelations. No deeper understanding of the workings of the universe. Just nada. I’m not sure what I expected from the night…but it certainly wasn’t what I got.

I spent most of the night feeling nauseous, but unable to throw up. There were moments when I felt an expansion of consciousness. I can only describe it as a feeling of growing outwards and becoming larger than the limited vessel of my physical body. However, after just a few moments of this expansiveness, my mind/ego would kick in, with a random thought/judgement about what was happening. Immediately, I would feel a shrinking and be back to feeling nauseous.

This continued for most of the night. Back and forth. Back and forth. I could not let go and allow myself to release into the experience. After a few episodes of dry heaving, where nothing actually came up, at 6am, I was finally able to vomit and purge something out of my system. Was it a release of negative energy or just the outcome of the purgative properties of the plant? I’m not sure if I’ll ever know.

A view of Bogota, the morning after our ayahuasca ceremony

Still, I believe that the Universe always provides you with what you need, rather than what you want, so I have no choice, but to try to figure out the lesson of the experience. There has to be one, right? 😉 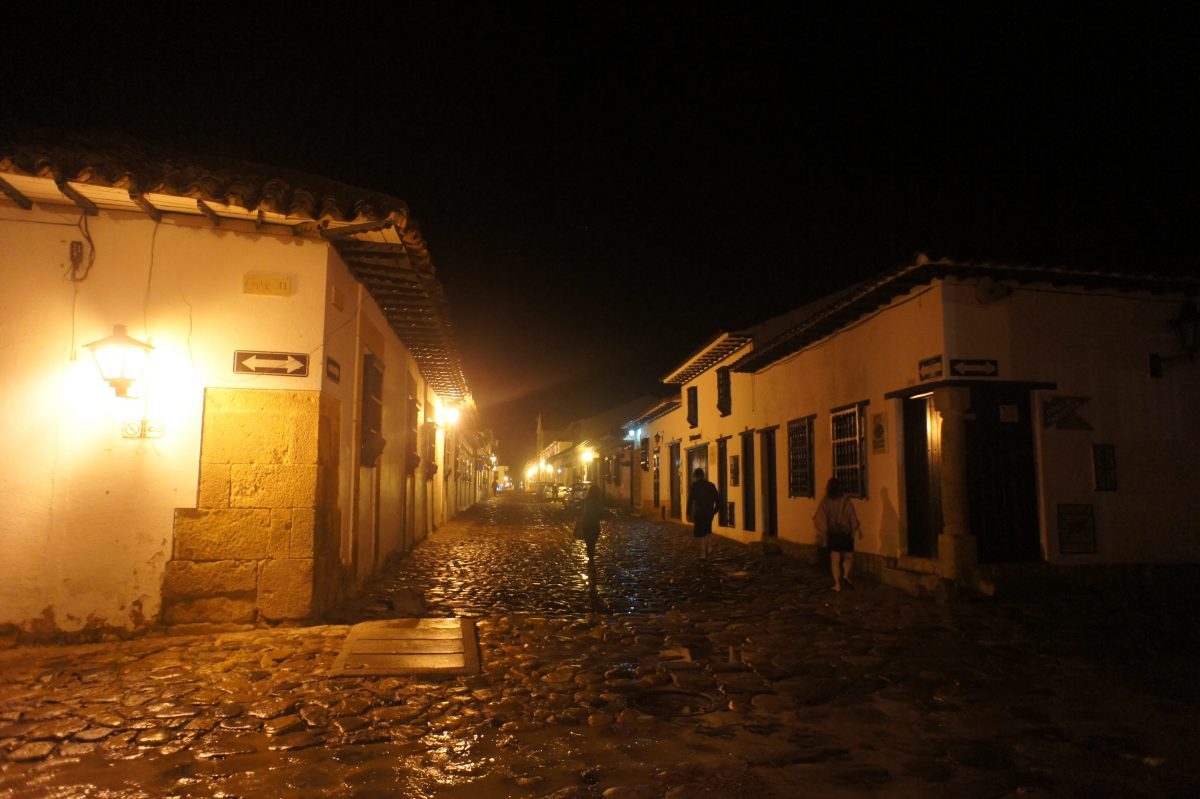