First Cabin Haneda | My Night in a Japanese Pod Hotel

Staying in a Japanese pod hotel has been on my bucket list for FOREVER. And I finally got a chance to stay in one called First Cabin Haneda during a long layover at Tokyo’s Haneda Airport. It was the perfect place to park myself for 9 hours while I waited for my connection to Seoul the next morning.

Who wants to stay in a Japanese capsule hotel? Me! Me! by Kojach@Flickr (CC BY 2.0)

I’ve been curious about staying in a Japanese pod hotel ever since I saw the movie, Baraka. The images of a multitude of capsules stacked on top of each other like lego, with humans hanging out inside them like caged animals have stuck with me.

I mean, how could they not?!

Why you should use a Japanese Pod Hotel

At my advanced traveling age, I’m long past the point where I’m willing to suffer long stopovers on airport floors or benches to save a few dollars (thank god). So when I booked a crazy last minute flight from Canada to Korea, that involved not one, but TWO, 9 hour stopovers, I made sure to look into airport hotels. One in Los Angeles and one at Tokyo’s Haneda Airport.

In LA, I booked at a Travelodge that had a swimming pool, Denny’s on the main floor and a free shuttle bus from LAX. You can book it here.

There’s a free shuttle from LAX to Travelodge

Not a bad place to spend a long layover

For our Tokyo layover, a night in a Japanese capsule hotel was the obvious solution.

Japanese capsules vary in their amenities and services, but you can count on them to be clean, more affordable than a traditional hotel, and super convenient. Capsule hotels are absolutely perfect for travellers on a budget, and for long layovers in an airport, there’s no better option.

Check out these highly rated capsule hotels in the Central Tokyo area. All have free wifi and an excellent location for exploring the city.

Located in the heart of Tokyo, guests at Glansit Akihabara, can soak in an onsen, enjoy free coffee, or eat an American breakfast. Reserve it here.

Luckily, there was a capsule hotel right inside Haneda Airport, where we were transiting, called First Cabin Haneda. There, we could choose to spend the night in either a Business Capsule or a First Class Capsule.

If First Cabin is fully booked, you can check out these other options near Haneda airport for a comfortable layover.

The First Class capsule is more like a mini hotel room. Decorated around an aviation/traveling theme, First Cabin Haneda was spotlessly clean, organized with a minimal design. In the lobby, there were computers, and a vending machine with hot snacks like edamame and ramen.

We were efficiently checked in and handed the keys to our individual sleeping capsules. Segregated by gender, the ladies capsule area included a lounge for socializing and a communal bathing area stocked with luxurious feeling (at least to us North Americans) Shisheido products, and a small hot tub.

All the amenities at First Cabin Haneda

After 13 hours on the plane, soaking my weary body in that bath of soothing water was completely rejuvenating. Refreshed and resting under a set of crisp, clean sheets, in the pyjamas provided, after 37 hours of traveling, there was nothing left to do, but bless Japanese efficiency. 🙂

What to expect at First Cabin Haneda

The First Haneda Cabin capsules do not lock, but have sliding curtains to give you privacy. I wouldn’t call them loud, but they’re definitely not completely silent, with travellers arriving and departing at all different times of the day and night. Bring earplugs if you’re a light sleeper.

There’s a lockable drawer for valuables under the bed, and suitcases can simply be left outside your individual capsule. In my personal experience, there’s very little risk of theft in East Asia. People generally leave bags, purses, phones wallets etc… just sitting on tables in cafes. Don’t be careless about it, but in general, there’s not much cause for worry.

A lockable drawer for valuables

Most Japanese capsule accommodations will provide you with everything you need for an overnight stay, including pyjamas, towels, and disposable toothbrush and toothpaste.

Most (but not all) Japanese pod hotels include a separate sauna and shower area for men and women. They’re usually fully stocked with shampoo, body wash, and cream for the face.

Sort out your transport in Tokyo in advance with these great deals on Klook.

First Cabin Haneda is located in Terminal 1 on the Haneda Airport Arrivals Floor (1st floor). There’s a free shuttle bus between terminals, if you should land somewhere other than Terminal 1, like I did.

You’ll find the Haneda shuttle bus to the domestic terminals on the 1st floor of the International Terminal. Look for bus stop number 0. If you’re arriving at Domestic Terminal 1, go to Bus Stop number 8 on the first floor Haneda Airport Arrivals level. It’ll take approximately 7-10 minutes to arrive at Terminal 1.

Growing up in Canada, there was nothing but space, space and more space. I just couldn’t understand why the heck you’d need to stay inside a tiny little sleeping tube, like a dog ready for international transport on a plane. Why not sleep in a comfortable and normal sized room instead?

After some years in Asia though, I began to see how spoiled we were for space in Canada. Space is at a serious premium in most Asian cities. There are literally people everywhere, especially in the dense urban spaces. Capsule hotels are a very practical, space and cost-efficient solution.

People. Oh so many people.

Culturally though, there are other reasons for these cube hotels. Their main purpose is not as a source of accommodation for backpackers and tourists traveling around the world on a budget. Rather, these little Japanese pods are mostly used by drunk “salarymen”, who land there after a night of heavy alcohol consumption, which is, for better or worse, a huge part of business culture in East Asia.

That’s why, until recently, it was a bit difficult to find capsule hotels with sections for women. Their original use had nothing to do with most women’s lives.

Are there Korean Capsule Hotels?

Korea has a similar type of accommodation that is used by drunk businessmen, called the jjimjilbang, that includes saunas, showers and sleeping areas.

Jjimjilbangs in Korea are different than Japanese capsules, in that they’re much more multi-use. Most jjimjilbangs have an entertainment area for families, couples and friends to socialize in, with massage chairs, restaurants, movie theatres, screen golf/video game zones, and even nail salons. It’s only late in the evening that jjimjilbangs seems to transform into sleeping quarters for inebriated individuals.

Socializing in the jjimjilbang, photo: heraldk.net

I find it hugely interesting that in Korea, the sleeping area is completely communal, whereas in Japan, everyone is neatly sectioned off into their own little personal pod. It says a lot about the cultural differences between the 2 countries… and though I’m ethnically Korean, the introvert in me definitely prefers the capsule. Who wants to listen to everyone snoring all night long?

Have you ever stayed in a Japanese pod hotel, capsule, or other unique type of accommodation? Where was it, and would you recommend it to other travellers?

Was this post about First Cabin Haneda helpful? PIN IT! 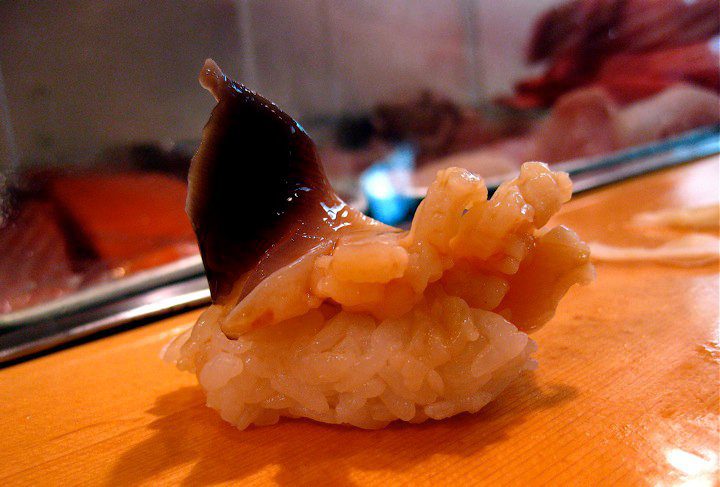 Where to Find the Best Sushi in Tsukiji Fish Market