Our Week in the Brazilian Slum: Favela Vidigal

A combination of beautiful landscape, fresh food and positive vibes made Rio the first city to make it onto our “we could live here” list. We’d only planned to spend 3 days visiting, but it quickly became obvious, that it wasn’t going to be enough time.

Happy on the streets of Rio

Now you might ask, why would we choose to spend only 3 days in Rio de Janeiro, one of the world’s most famous and beautiful cities? And the short answer is: our travel budget.

In the last decade, Brazil has quickly grown from a developing country into one of the world’s largest economies, and prices in the country have skyrocketed, along with it’s development. Brazil is no longer a “cheap” tourist destination. Costs to travel are as high as for Western Europe or Canada. And that’s why we scheduled just 3 short days to get a feel for the city and see the major sights. Not very smart.

Fortunately, our round the world ticket allowed us some flexibility, so we delayed our next flight to Montevideo, Uruguay by a week, and then turned our attention to the job of finding somewhere to rest our heads for the week.

As you can imagine, finding budget accommodation, in a good location, last minute in a city like Rio is definitely a challenge. And that’s how we ended up staying in Favela Vidigal.

Favela is the term for a shanty town or slum in Brazil. And while the term favela was coined in the late 1800s, most modern favelas appeared in the 1970s, when there was a large exodus of people from the rural areas of Brazil to the cities.

In Rio de Janeiro, the favelas often survive right next to middle class neighbourhoods, and their contrast is striking. Today, there are more than 600 separate favelas in Rio de Janeiro alone, all with varying levels of public services, sanitation and poverty.

For example, Rocinha, the largest favela (technically favela barrio – favela neighbourhood) in Rio, has almost 70,000 people residing inside it and almost all the houses have basic sanitation, plumbing and electricity. Rocinha even has banks, pharmacies, bus lines and a locally based TV channel!

In contrast, the 90,000 residents of Jacarezinho, in Rio’s North Zone, suffer from a lack of infrastructure, the presence of drug lords, Comando Vermelho, and the threat of constant violence.

The thought of staying in a favela had crossed our minds in the past, but the thought had never stuck, dismissed as being too “dangerous.” However, our strong desire to save some reais and our curiosity trumped the fearful feeling we were having.

Favela Vidigal up ahead

The entrance to the favela

It wasn’t a decision we made lightly. Online research was in order before we made the reservation. And what I found surprised me. Not only were reviews of the favela positive, but many travelers felt that the favela was safe, friendly and a unique local experience.

I’d emailed Vanessa, the owner of the Favela Vidigal Guesthouse, asking if the favela was safe, to which she’d replied that it was “very safe,” but I still felt nervous as we approached the entrance of the favela. Having seen City of God and heard so many scary things about the Brazilian slum, I just wasn’t sure what to expect.

Nonetheless, we left our comfortable location close to Copacabana Beach, hopped in a shared mini-bus and before long, we were at the bottom of the long hill that wound its way up and through the favela. Here, we would have to walk uphill to the Guesthouse, or take our chances on the back of one of the motorcycle taxis. Since we were carrying our backpacks, we opted for the motorcycle taxi, and I held tight as gravity seemed to want to pull me and my bag right off the back of the bike.

The breathtaking ride finally over, we stopped at the entrance of a narrow street, one that the motorcycle could not continue onto, and disembarked. After paying our R$2, we made our way cautiously down the street.

The streets of Vidigal

Rainbows from the roof

All around us, we could hear people yelling, cheering and screaming. It seems that we had arrived in the middle of a hotly contested Flamengo – Botafogo football match, and the rivalry inside the favela was intense. It wasn’t scary though. In fact, I immediately felt a sense of community. Neighbours yelled good-naturedly over fences and through windows at each other, and it was obvious that everyone knew each other well.

Everyone we passed on the small street smiled or said hello, and when we paused outside a door in confusion, wondering if we were at the right place, the locals immediately pointed us towards the right door. It was clear that we were not the first backpackers that had arrived on the doorstep of the Favela Vidigal Guesthouse.

Vanessa and Tito, the owners of Favela Vidigal

We were greeted by Vanessa, who along with Tito (who we would meet later), ran the Guesthouse. The Guesthouse had just 2 rooms, but was clean and comfortable, had air conditioning and wifi, plus a killer view of Ipanema Beach off the rooftop. There were no gang members running around with guns, no violence and where we were, no signs of real poverty. Yes, furnishings were simple and the buildings were a bit rundown, but there were televisions and washing machines and many members of the community were expanding their homes. There were cafes, restaurants, pool halls and grocery stores, just like in any other regular neighbourhood. In a nutshell, the reality of the slum didn’t gel at all with what I had imagined.

Our fears banished, we went on to spend a very happy and safe week in Favela Vidigal. With it’s perfect location in Rio’s Zona Sul, it was just a pleasant stroll or short minivan ride to Leblon, Ipanema and Copacabana Beaches. It became very easy and natural to hop on one of the motorcycle taxis traveling up or down the hill, or eat in one of the favela’s many restaurants. We left and entered the favela during the day and at night, and never felt in danger at any time.

Strolling past Leblon Beach on our way to the favela

A meal inside the favela

The line up for the motorcycle taxi

The best part was that we were staying in a prime area of Rio’s Zona Sul for R$60 or about $30. And it wasn’t just accommodation that was cheaper in the favela. Everything was cheaper. Coffee, juice, restaurants…even Havaianas, could be purchased for a fraction of the price inside the favela.

After a few days in the favela, we began to notice a huge police presence and found out from Vanessa and Tito that the favela had been ‘pacified’ just a few months earlier.

Brazil’s policy of Pacification began in November 2008, with the pacification of the Santa Marta favela in Rio’s Botafogo. Created and implemented by State Public Security Secretary, José Mariano Beltrame, the program aims to reclaim territories controlled by drug dealers.

Typically, this is accomplished by Rio’s elite police force, the BPOE, which storms the favelas and drives out or arrests gang leaders. The UPP (Pacifying Police Unit or Unidade de Policia Paficadora) then sets up shop in the favela and provides a form of community policing.

With the World Cup coming to Rio de Janeiro, the government hopes to install 40 UPPs by 2014.

The UPP patrolling the streets of Favela Vidigal

We saw the UPP presence everywhere, but the locals did not necessarily agree that this made the favela safer. Yes, in the past, there had been men selling kilos of drugs openly on the street, while having a beer, guns laying casually next to them on plastic chairs, but according to the people, the drug traffickers had kept a kind of draconian order in the favela. The citizens who resided inside were not allowed to use or abuse drugs and the risk for getting caught stealing was losing a finger… or two. There was order, and people lived raucously but peacefully. Doors were rarely locked.

Strangely, the druglords also showed the residents of the favela a kind of respect, never entering a home unless invited inside. Something, the UPP seemed to have trouble doing, according to the locals.

Now things were slowly changing and shifting, though to us the neighborhood seemed as safe as ever, as safe as anywhere. People began greeting us as they recognized our faces day after day, and the longer we were there, the more we began to feel like a part of the community. We didn’t speak Portuguese but managed to muster a friendly “Oi”, the Portuguese word for “hi,” from time to time.

We never did learn the Portuguese for good-bye.

Staying with Vanessa and Tito is like staying with old friends, and we had a great night out together at Juniors, the local bar.

A night out at Juniors, a local bar

To book a stay at the Favela Vidigal Guesthouse, visit Hostelbookers, or their Facebook Page. Book early. You won’t regret it. 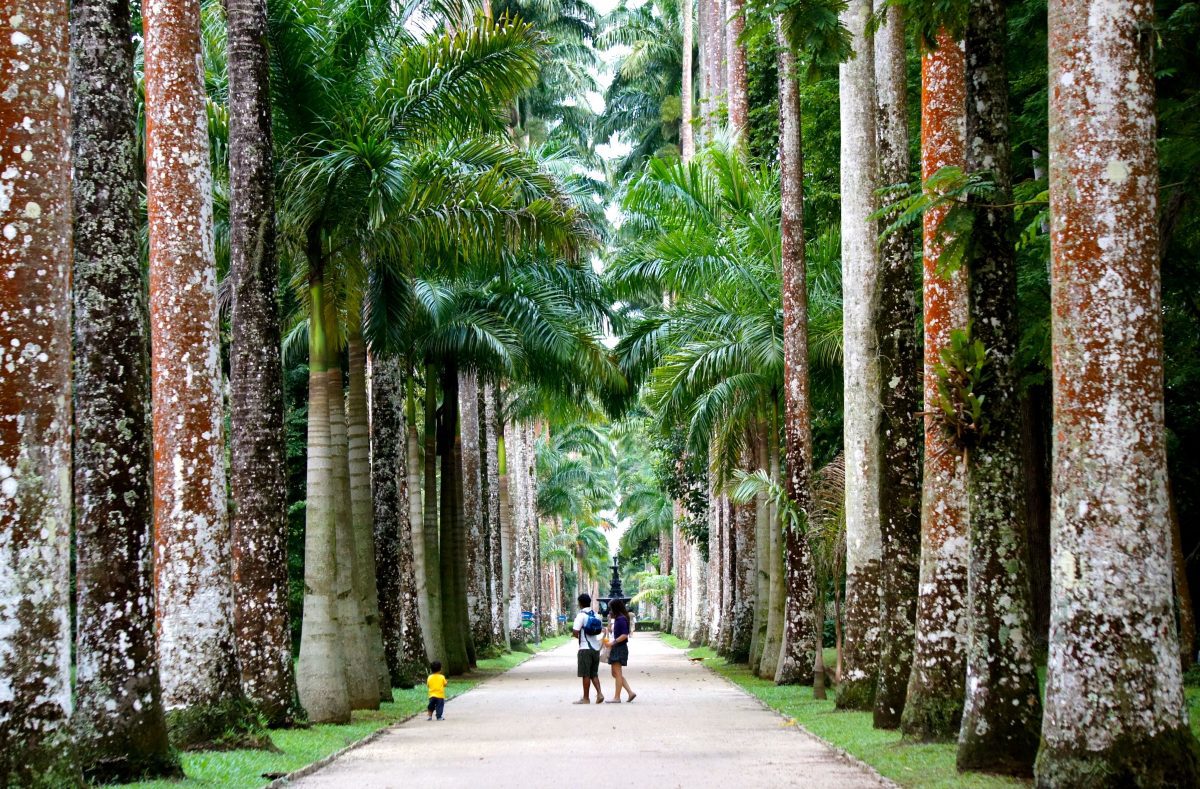