There are 27 bridges spanning the mighty Han River in Seoul’s capital area, but Banpo Bridge remains one of the most iconic. There’s good reason. The Rainbow Fountain attached to both its edges is the longest bridge fountain in the entire world. It’s a brilliant spectacle to see, particularly on warm summer evenings. Best of all, it’s free!

Banpo Bridge is the top half of the first double-decker bridge ever built in Korea. It was completed almost 40 years ago, back in 1982.

You’ll also hear Banpo Bridge being called Banpodaegyo Bridge. They are one and the same, so don’t get too confused by this. It’s because the phonetic translation of the Korean 반포대교, is Banpodaegyo. This is actually a total misnomer, since 반포 = Banpo and 대교 already means big bridge, but it’s widely accepted anyway.

Jamsugyo is often under water during Korea’s monsoon season. Image by Yeon Woo Lee via Pixabay

The bottom half is called Jamsu Bridge, and it was specifically designed to be under water. In fact, the Korean 잠수교, actually means submerged bridge. When rainfall is high during monsoon season, you can count on Jamsugyo disappearing completely from view. Take a stroll across Jamsugyo during dry periods for unique views of the east and west sides of the city, with the waters of the Han as your soundtrack.

Which side of Banpo Bridge should I visit?

Banpo Bridge is located almost in the exact centre of the city, and connects the districts of Seocho in the south, to Yongsan in the north.

The south end is definitely where most of the action is. There’s green space for picnicking, places to sit and watch the Rainbow Fountain light show, and access to the Some Sevit Floating Islands. On weekends, in the warmer months, you can explore the Bamdokkaebi Night Market with its food trucks and unique shopping stalls. You can also enjoy views of Namsan and N Seoul Tower from the south side.

The north side of the bridge is less developed, however you can still find bike paths, workout stations, and some green space.

> Read our complete guide to all the things you can do at Banpo Hangang Park.

There’s a lot to do at Banpo Bridge, but one of the most well known attractions in the city and around the world, is the Rainbow Fountain show. Running for a total length of 570 metres on both sides, it’s the longest bridge fountain in the entire world.

During the show, 380 nozzles suction water up from the Han River below and spray them out into a sparkling show of music and movement. A whopping 60 tons of water is used for every single minute that the Rainbow Fountain is operating. The spray cascades outwards for an incredible 43 metres, before falling 20 metres back down into the river.

You can catch the fountain show during both the day and night, but it’s definitely better after the sun goes down. At night, the Banpo Bridge Rainbow Fountain is illuminated by a rainbow of 200 LED lights that highlight the shooting sprays of water, as they dance in synchronization with various pieces of music. Did I mention that it’s free?

> Check out everything you can do in Seoul at night.

When can I see the Banpo Bridge Rainbow Fountain show?

The Banpo Bridge Rainbow Fountain operates every day from April to October, four to six times a day. Each show lasts approximately 20 minutes. Schedules vary from season to season, and from day to day of the week.

The current Banpo Bridge Rainbow Fountain schedule is as follows:

Don’t leave Seoul without checking out these super popular activities and attractions.

How to get unique views

There’s a couple of ways to get unique views of Banpo Bridge and the Banpo Bridge Rainbow Fountain show. The first involves making your way over to the south end of Dongjak Bridge, which is the very next Hangang Bridge on the west side.

See the Banpo Bridge Rainbow Fountain from a different perspective

There, you’ll find two incredible eMart 24 convenience stores, both with incredible views of the city. Each is 5 floors and include cafes, snack zones, bookshop, lounge and outdoor rooftop, along with a limited selection of the usual convenience store goodies. They even have Heineken and local craft beer on tap!

On the west side eMart, you can see the N Seoul Tower and western side of the city. Head up to the cafe or rooftop on the east side of Dongjak Bridge, for unique views of Banpo Bridge.

If you’d like to see the fountain show up close and personal, get yourself onto a Han River Cruise. You’ll enjoy a vantage point that not too many see. Be sure to check which dock your cruise leaves from, and be sure to time your cruise accordingly for the Banpo Bridge Rainbow Fountain show.

How to go to Banpo Bridge by subway

It’s possible to drive to Banpo Bridge if you have a car, but I wouldn’t recommend it at peak times. There’s limited paid parking spaces, and waits for a spot can get pretty long (and frustrating).

The most convenient option for getting to Banpo Bridge is definitely via Seoul subway.

Did you find this post about Banpo Bridge & the Rainbow Fountain helpful? PIN IT! 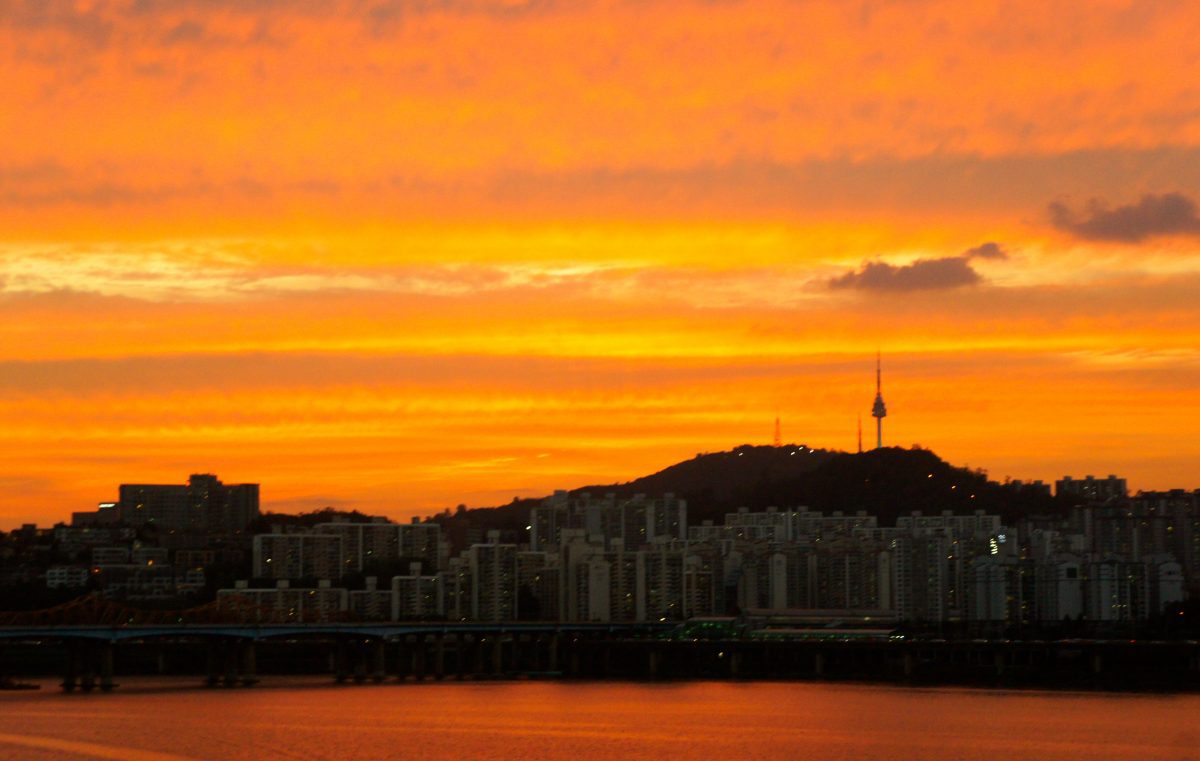