Starfield Coex Mall is the largest underground shopping mall in all of Asia. I can personally attest to this, because I ALWAYS get lost in there. It takes up a huge piece of real estate stretching all the way from Samseong subway station to Bongeunsa Temple. It can take 15 minutes at a fast clip just to walk from one side of the mall to the other.

It was renovated back in 2014, under the concept of “The Unfolding Sky.” The new design did a great job of increasing natural light and a feeling of airiness in what was formerly a pretty dark and crowded feeling space. This is one of the best places to shop in Seoul. There are countless local and international brands, beauty, and lifestyle stores available for you to explore.

*This post may contain affiliate links. Read our disclosure.

Thing to do at Starfield Coex Mall

Starfield Coex Mall is so much more than shopping though. There’s a 17 screen Megabox cinema, one of Seoul’s biggest aquariums, an event area for concerts and other performances, a huge library, and multiple dining areas. It’s also located right next to one of the oldest Buddhist temples in the city, and connected to the City Air Terminal, a casino, the Trade Tower, Intercontinental Hotel, and Hyundai Department Store.

Add the massive COEX Convention and Exhibition Space into the equation, which always has exciting events happening, and you could spend days and days at Starfield Coex Mall without ever doing it all.

Did you know you can check-in, drop off luggage (for certain airlines), clear immigration, AND take a limousine bus from the City Air Terminal near Coex Mall, direct to the airport?

Save time and money by booking in advance here

The Coex Aquarium is one of the biggest aquariums in Korea with over 40,000 sea animals from over 650 species populating its 183 exhibition tanks and 90 breeding tanks. There are 16 discovery zones that include 6 themed areas arranged in a preset path through the Coex Aquarium.

The Coex Aquarium has the largest number of sharks in Korea

You can learn about fish and other animals local to each of the different theme areas, which include: Story of Korean Fish, Amazonia World, Mangrove and Beach, Ocean Kingdom, Marine Mammal Village, Deep Blue Sea Tunnel, Penguin’s Playground and much more.

The undersea tunnel is particularly stunning. Here, you walk through an acrylic tunnel that is filled with 2000 tons of water, while surrounded by sharks and sea turtles swimming all around you. The aquarium at Starfield Coex Mall houses the highest number of sharks in Korea, so it’s really a unique experience.

Currently, there’s a special offer available on Klook when you buy tickets to Coex Aquarium. From April 1 – December 31st, 2019, you’ll also get a free hanbok experience, 10% discount at the aquarium cafe and gift shop, and a 5% discount on purchases over $100 at the Sulwhasoo Flagship store in Cheongdam with your already discounted ticket. Pretty sweet deal!

It’s normally 28,000 won per adult entrance ticket, but you can get a great discount, as well as all those extra benefits, by buying your tickets in advance here.

Click here to get discounted tickets to the Coex Aquarium

The Megabox Cinema is located in the Starfield COEX Mall and has a total of 17 theatres, including speciality theatres, like the Megabox Boutique M Cinema where you’ll receive Evian water, a blanket and slippers to wear inside the theatre. You can also order premium beer, cocktails and desserts if you like.

My personal favourite thing at Megabox Cinema though is the 5 rows of single seats they’ve implemented in 6 of their theatres. It’s one of the ways I soothe my introverted feathers in a very extroverted city.

The Hyundai Department Store is attached to the Starfield Coex Mall, and there’s much more to do there than just shop… though you’d be forgiven for wanting to do so.

On the B1 level, you’ll find a food court with various Korean dining options, as well as food stalls that have more international options. Most of these stalls have counter seating. You just order from the vendor, have a seat and wait to be served a hot meal. There’s burgers, salads, Mexican, lobster and much more to choose from.

Incidentally, if you’ve got a Cinnabon craving that can’t be denied, this is one of the few places in the city where you can get your fix. 😉

If you head up to the 10th floor, you’ll find a more formal, restaurant style dining area.

Get spicy at the Kimchi Field Museum

If you can’t enough of this spicy dish head to the Pulmuone Kimchi Field Museum.

The museum is divided into 3 sections, covering history, preparation and nutritional benefits. There’s also an area explaining how different climates and times of year inform which kimchi is made for consumption. You might be surprised to learn that the fermented napa cabbage variety isn’t actually kimchi, and that there are over 100 different kinds, including both spicy and non-spicy varieties.

Find out everything you ever wanted to know about kimchi.

You can find the Kimchi Field Museum on the B2 level of Starfield Coex Mall. It’s closer to Bongeunsa station on Line 9, near the ASEM Plaza and Coex Aquarium, than Samseong Station on Line 2.

If you’re a K-pop fan, you’re in luck because a complex dedicated to all things SM Entertainment is attached to Starfield Coex Mall. You’ll find SMTown on the 3rd to 6th floors of Coex Artium, it includes a museum with exhibits about the label’s artists and history. And with artists like EXO, Girls Generation, and Super Junior on the roster, it’s a big draw for any fan. On the 5th and 6th floors, you can watch unreleased concerts, music videos and more, at the largest hologram theatre in the world.

SMTown is a must do for any fan of SM Entertainment

Be sure to check out SMTown Media outside. This high definition screen is as big as 4 basketball courts, and the biggest display in Korea. The first time I saw it, I was totally wowed because it looked like a huge aquarium with whales swimming around in it.

If you’re a hardcore SM Artists Fan, these activities are made especially for you.

> Visit the SMTown Museum where you can learn about SMTown’s history and artists, explore 6 different themed spaces and see exclusive content. Get discounted tickets for SMTown.

> Get your fangirl on with an all day Hallyu Kpop Tour in Seoul. You might even spot your favourite Kpop idol!

The Starfield Library was a sensation from the moment it opened last year. No big surprise, because the design is really outstanding.

You can’t miss it because it takes up a huge space in the middle of the underground Starfield Coex Mall. As you approach the library, which is open on all sides to the stores around it, you’ll be totally wowed by 3 towering bookshelves standing 13 metres tall each. If you’re a bibliophile, the sight of the 50,000 books and magazines in the Starfield Library certainly stirs the soul.

There’s no need for a library card there, because as of yet, reading materials can only be enjoyed inside the Starfield library. There are also free monthly cultural events and different performances based on different themes each day. On the upper levels, there’s a convenience store, as well as a few different cafes, including a Billy Angel Cake Company… cuz ya know, we all need cake sometimes.

Get there in the early morning hours if you’re looking for anything resembling the quiet of a traditional library. Otherwise, you can join the rest of the selfie takers and tourists oohing and ahhing at the gorgeousness of the Starfield Library.

Bongeunsa Temple is widely regarded as one of the best places in Seoul to see the striking contrast between the traditional and the modern, and I’d have to agree.

When you walk into Bongeunsa, you enter a hushed world so markedly different from the world you just came from, it’s hard to believe it takes just a few steps to get there from the chaos of Starfield Coex Mall. Seek out the striking 28 metre tall stone statue of Maitreya (the Future Buddha, aptly) that’s watched peacefully as this area has transformed from farmland and rice paddies to one of the wealthiest, most modern parts of Seoul.

Bongeunsa Temple is one of the best places to see the contrast of old and new in Seoul.

It was originally known as Gyeonseongsa Temple, and it was built way back in 794, during the Silla Dynasty.  It became known as Bongeunsa Temple after it was renovated in 1498.

In the library, you’ll find Flower Garland Sutra woodblock carvings and 3,479 Buddhist scriptures. If you visit during the 9th day of the 8th month of the Lunar Calendar, you can watch monks march around the Temple, carrying these scriptures on their heads, while reciting the Buddhist rites.

On the 11th floor of the Hyundai Department store, you’ll find the Hyundai Culture Centre, which offers affordable art, music, cooking, sports courses, as well as classes for children with their moms or dads. I’ve personally spent a ton of time there with Naia, taking ballet, art, sports classes and more. This place literally saved my life with great activities and learning experiences for her on cold or polluted days.

There are also art exhibitions, a small coffee stand, and a gorgeous outdoor Sky Garden that’s accessible to anyone. There’s green space, some seating, fountains and a lovely, peaceful feeling (well, except for when the kids get out of class ha!)

It’s a great space to take a breather from the chaos of the department store and Starfield Coex Mall in general (which can get really, really busy).

Did you know that there’s a lovely patio/green space outside the Hyundai Department store Culture Centre at Coex Mall on the 11th floor? 🌿🌳🌴 * Check it out if you need some space and a little breather from the crowds of Seoul. It’s been empty everytime I’ve been there. * * * * * #momentslikethis #seoulite #everythingeverywhere #tlasia #expatfamily #hyundai #peacefullplace

If you can’t get Gangnam Style out of your head no matter how hard you try, head out to the front of the Starfield Coex Mall to pose under this huge testament to Korean’s biggest pop export.

Don’t stand on the stage though, unless you’re comfortable dancing Gangnam Style in front of an audience. The song will automatically start playing once you do.

Get your Gangnam Style on… you know you want to!

This sculpture had a home inside the Starfield Library for a few months, until it was replaced by a towering display of books for the holidays. If you must see it, you can find it in the ASEM Plaza, on the Bongeunsa Temple side of Starfield Coex Mall.

Is it a fruit? Is it a veggie? Is it a tree? Who really knows.

How to get to Starfield Coex Mall

Starfield Coex Mall is located in Samseong-dong in the Gangnam district, and it’s possible to get there easily from 3 different subway lines.

Have you been to Starfield Coex Mall? What are your favourite things to do and see there? Let us know in the comments below.

Did you find this post about Starfield Coex Mall helpful? PIN IT! 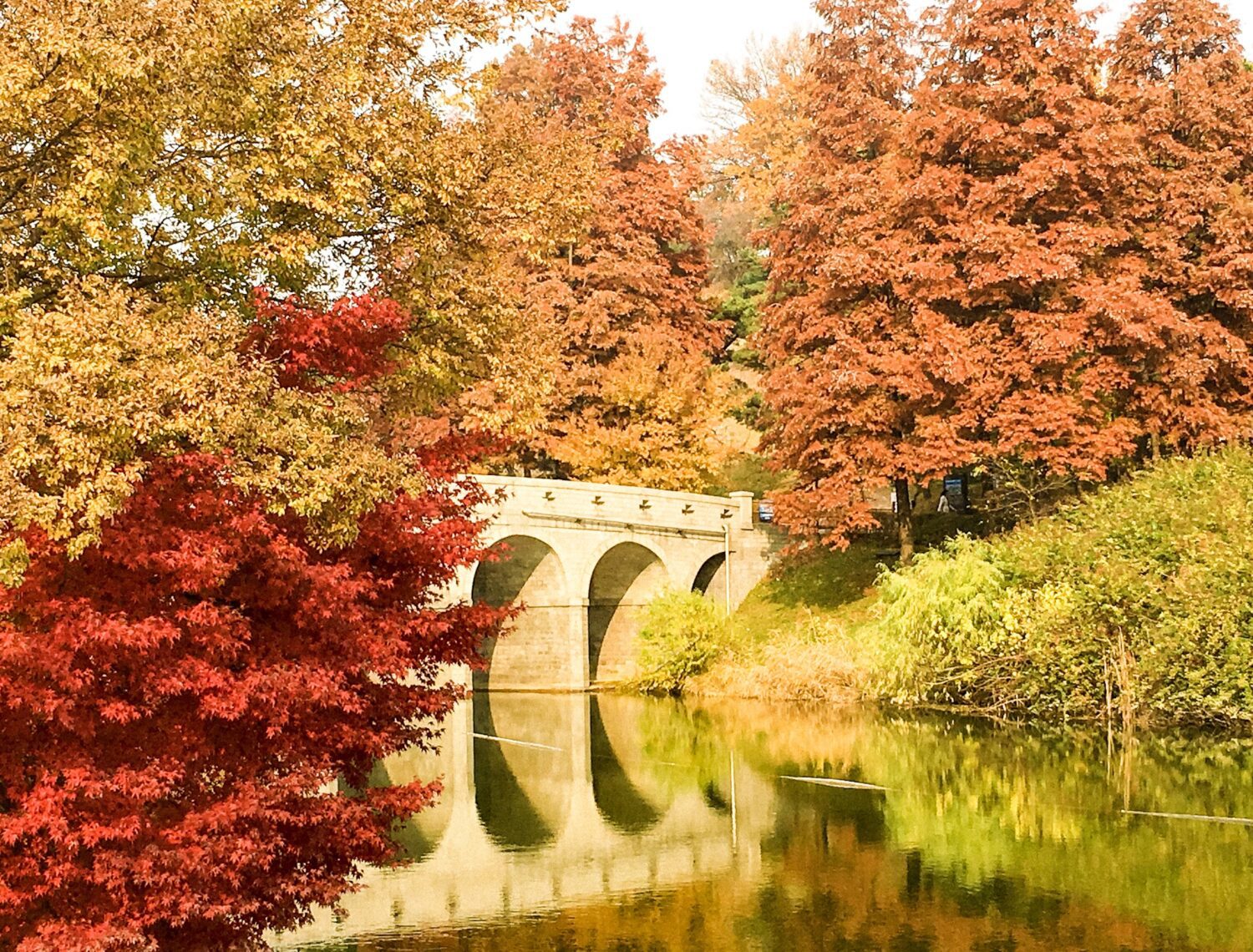