When the traffic and chaos of Albania’s capital starts to get to you, return to simpler times by taking one of these easy day trips from Tirana.

Get out of forward-looking Tirana and you’ll discover natural wonders, historical cities, mystical heroes and so much more. All of these day trips can easily be accomplished in a day, but don’t be surprised if you end up booking a last minute hotel in some of these places!

The Cave of Pellumbas is one of just 6 karstic caves in Europe. Located 27km southeast of Tirana, and about an hour’s walk away from the village of Pellumbas, entering the cave is like entering another world. It’s definitely one of the most unique and rewarding day trips from Tirana.

It’s so dark inside that people once thought it was endless. The Albanian name, Shpella e Zeze actually means Black Cave because of this. In reality though, it’s 360 metres long, 15 metres at its widest and ranges 15-45 metres in height. The echoing sound of bats flying around the cave are only made more eerie by the size of the huge cavern. Massive stalagmites and stalactites several metres long adorn the cave, meaning they’ve been growing there for thousands and thousands of years.

The mouth of the Cave of Pellumbas by Nigel Hoult @Flickr

The Cave of Pellumbas has a long history, which has been studied by the Tirana Archaeological Institute. Ancient bears inhabited it as far back as 40,000 years ago, before humans from the Middle Paleolithic period settled in. During the World Wars, the cave even functioned as a secret hiding spot for villagers.

How to get to the Cave of Pellumbus

To visit independently, get a bus / furgon / taxi to the village of Pellumbus. From there, ask a local to point you in the right direction, and then look for a well-marked trailhead which leads to the mouth of the cave. You can enjoy incredible views of the Erzen River Canyon, with its dramatic mountainside drops, as you make the 2km trek up to the cave mouth. If you need to take a rest, there are benches along the way to sit. Be sure to take a strong flashlight or head lamp with you for the interior of the cave. If you don’t have one, you can rent one near the entrance.

There are signs in English and Albanian along the trail, and guardrails on the most precarious edges, but you should still exercise caution. It’s very steep and can be muddy. There may or may not be a small entrance fee of around 100 lek collected at the entrance to the cave.

There’s a restaurant next to the Visitor Centre. Albanian friends recommend that you pre-order food before you begin the walk up to the Cave of Pellumbas, so that it’ll be ready for you by the time you get down.

Read our full guide to Durres, Albania – another worthy day trip from Tirana.

Drive the donkey road to Elbasan

Albanian roads have come a long way since I first visited back in 2010, but you can still find remnants of the “old” roads in places. What is commonly called the donkey road, is actually part of highway SH3 that links Tirana to Elbasan.

These days, SH3 or the Tirana-Elbasan Highway is mostly a nicely paved 6 lane divided highway. It’ll get you from Tirana to Elbasan in the fastest, most comfortable way possible. It takes you about 40 minutes start to finish. When the entire Tirana-Albasan Highway is complete, it’ll take just 20 minutes!

However, if you’re craving a bit of adventure on your day trip from Tirana and have some extra time, take the old donkey road over the mountain instead. You’ll find 2 undivided single lanes, steep mountain passes, narrow roads, very few guard rails, and hairpin turns.

Along the way though, you’ll be blessed with incredible views of several mountains ranges. You might see kids selling mulberries or a farmer on the side of the road selling impossibly fresh lamb. And by fresh, I mean, with it’s throat just slit and the rest of the flock behind him (no exaggeration – I actually saw this), or even some random fires set by villagers on the side of the road (yes, I’ve seen this too).

Now why would you set a fire by the road? My Albanian family says “money!”

How to get to the Donkey Road

To get onto the donkey road, take the Tirana-Elbasan highway out of Tirana. Instead of continuing straight, make a turn just after Hotel Eklips. If you zoom out the map, you’ll see how the road becomes a mass of squiggles and turns, instead of straight highway. If you start to feel nauseous while driving, you’ll know you’re on the right road. 😉

You’re probably wondering why it’s called the donkey road? Well, local lore says that when this road was built by Italians, they planned the road by following a donkey through the mountain passes to find the safest route. Truth or legend? You be the judge.

Wanna stay overnight in Elbasan instead? Find somewhere to stay.

Have spit-roasted lamb at Kasemi

After all that driving, you’re sure to have worked up at appetite, and Bar Restorant Kasemi is the perfect pit-stop just before you reach Elbasan. This is the restaurant my Albanian family stops at every single time we’re on this road.

The translations on the Kasemi menu are a little off, but you get the idea

My Albanian family after a feast of lamb!

Located at approximately kilometre 27 of the old donkey road (Krrabe), you can find spit-roasted lamb that’s been traditionally roasted whole over coals there. At Kasemi, you can eat pretty much any part of the lamb you wish – from the head to the innards. Be sure to order a village salad, made up of tomatoes, peppers, cucumbers and onions to help you digest all that meat.

Find out what to eat and where in our guide to Tirana restaurants.

Gjergj Skanderbeg is Albania’s national hero and symbol of resistance for good reason.

From the castle of Kruje, the so called “dragon of Albania,” fought off a number of huge sieges from the Turks, with a small army of just 3,000 men. His military prowess proved to be a major obstacle to Ottoman forces who’d previously conquered much larger cities and armies, preventing their further expansion into Western Europe. In fact, Kruja Castle wasn’t breached until 1478, a full 10 years after Skanderbeg’s death.

Today, this ancient symbol of Albanian preserverence, strength and defiance, houses a museum dedicated to Skanderbeg’s life and victories. Be sure to see the replica of the iconic Arms of Skanderbeg – a famous goat head-topped helmet and massive sword.

Spiritual day trip from Tirana: Make the pilgrimage to the Sacred Cave of Sarisalltik

I’ve long been fascinated by mystic Sufism. My visit to Konya in Turkey to see the whirling dervishes where  Rumi founded them, remain one of my favourite travel experiences of all time.

I may have cried *ahem

One of the most beautiful things I’ve ever seen

So when I found out that Albania was home to the Bektashi Order – practicers of a mystical sufism that preaches tolerance above all things, I was thrilled and curious to find out more. The Bektashis are all men, but do not separate the genders, drink alcohol, and the wearing of veils is not required by women. They value open exchange and communication with all people and religions.

The centre of the Bektashi Order can be found on top of Mount Kruja. At the Sacred Cave of Sarisalltik – a 13th century Turkish dervish venerated by the Bektashis, you can see a fountain of holy water, the first mosque ever built in Albania – the final resting place of Sarisalltik himself.

You are welcome to make the trek up to the Sacred Cave at any time, but might want to avoid making the day trip to Sarisalltik from Tirana in May. In that month, the Bektashi Order makes a pilgrimage up to the top of Kruja Mountain to honour Sarisalltik, and the trail is much busier than normal.

If you do visit though, you’ll undoubtedly be welcomed into the tekke (the Bektashi mosque, without a minaret), for tea, coffee, or even a shot of raki – Albania’s strong national alcohol.

How to get to Kruja & Sarisalltik

There are direct buses from Tirana departing from the city centre. It takes approximately 45 minutes to reach Kruja, and costs 100 lek. If you prefer, you can catch a furgon from the Northern Albania Regional Bus Terminal. Furgons don’t run on a set timetable, but leave for their destinations as they fill up. Kruja is 30 kilometres from Tirana, and one of the most worthwhile day trips from Tirana.

If you’d prefer to take a guided tour, instead of traveling independently, check out this day trip of Tirana and Kruja, that includes air-conditioned transport, and walking tours of important historic sites in both cities.

From the centre of Kruja, it should take approximately 3 hours to hike up and down the mountain depending on your pace. Be sure to leave time to visit the Sacred Cave and have a look around. You can also simply drive to Sarisalltik, as there is an accessible road, but then you’d be missing out on the breathtaking views of the Adriatic Sea, small lakes and mountainous landscapes to be found at the 1200 metre peak.

Views from the top of Mount Kruja by @emirjonhysenbelliu/IG

Be sure to stop at the 17th century Old Bazaar to look at traditional handmade crafts and antiques before making the trip back to Tirana.

I bet you’d be surprised to discover that Albanians have quite a crush on the United States. You can see evidence of this all over the country, from streets named after US Presidents, to American flags flying in the most unexpected of places. The roots of this stretch as far back as WWI, when President Wilson insisted that Albania’s borders remain in place, and continued when Clinton led NATO in bombing Serbia during Milosevic’s ethnic cleansing of Kosovo Albanians in 1999.

In Fushe-Kruje, in a square also named after him, you’ll find an almost 3 metre tall statue of George W. Bush, dressed casually and waving in greeting. It was erected to commemorate his visit to the tiny town back in 2007, where he met local people to discuss US funded micro-loans. Bush was the first US President to visit post-Communist Albania in 2007. This easily gets my vote for quirkiest Tirana day trip possible.

It’s somewhat surreal to see him standing in the middle of this miniscule Albanian village, but I guess no more so, than seeing Woodrow Wilson standing jauntily in a stove-pipe hat in the middle of an intersection in Tirana.

Incidently, statues of several US Presidents, Secretaries of State and US diplomats can be found all across Albania and Kosovo, should you want to make a trip out of finding all of them. Both Clintons, Wilson, Albright, Holbrooke and William Walker all make an appearance.

Below are a few more tours around Albania I recommend checking out:

Which day trip from Tirana piques your interest? Let us know!

Did you find this post about day trips from Tirana helpful? PIN IT! 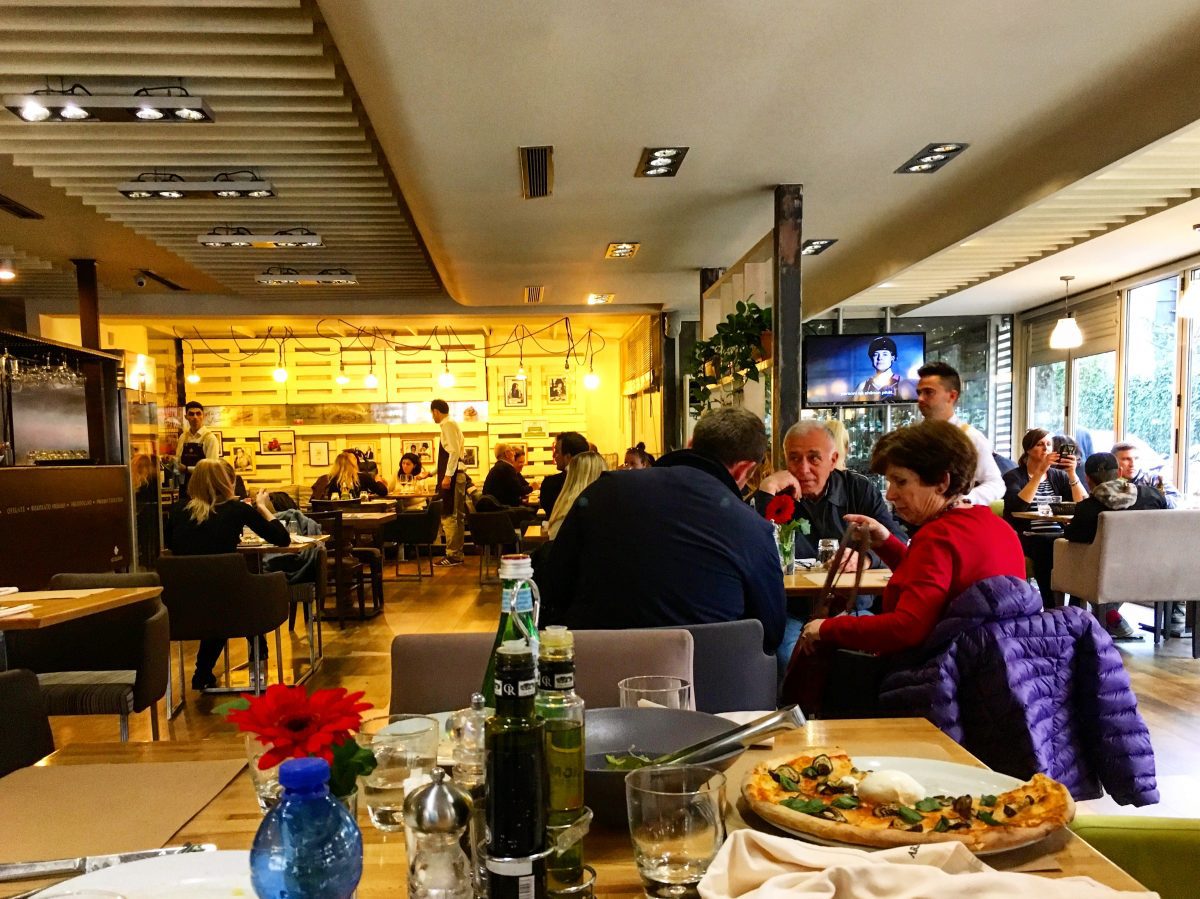