The last of the Mediterranean’s hidden gems isn’t so hidden any more, after multiple appearances on various “best of” travel lists in the last decade. Still… relative to its more famous neighbours, Albania is refreshingly untouched by tourists. But not for long. Every year, more and more people discover one of the world’s most unique destinations.

Rising out of the ashes of a hardline isolationist communism less than 30 years ago, Albania is a country that will beguile you as much as it frustrates you. There, it’s totally possible to have an entire UNESCO site all to yourself, discover totally uncharted territory, or meet locals who’re surprised by your very presence in their country. Learn a few phrases of a language that only a tiny percentage of the world knows, and you’ll already be 10 steps ahead of most visitors to the country.

In this guide, I’ll cover the basics of traveling around Albania, including the best things to see, general costs, and insider tips gleaned from seeing Albania with my husband, his family, and friends who actually live there.

Best Things to Do in Albania

Albania is a full 10 times smaller than nearby Italy, but it’s attractions are surprisingly diverse. Hop on a crowded furgon to unpronounceable places, explore a museum made out of bunkers, and bask on an impossibly perfect beach, and you’ll soon realize just how incredibly unique Albania is.

Here are my recommendations for some of the best things to do in Albania. Fortunately, the country is geographically small, so you just might be able to check out most of these activities during your visit.

The shoulder months of April to May and September to October are the best in terms of comfortable temperatures, but ask any Albanian, and they’ll tell you that summer is the best time to visit Albania. By far. I tend to agree. Because this is when the beaches of the Albanian Riviera roar to life, nightlife in Tirana’s Blloku rages until morning, and the town of Durres fills with Albanian diaspora from all over the world.

That said, you can enjoy Albania in pretty much any season. It has an enviable Mediterranean climate, with hot, dry summers, and mild, rainy winters. It rarely snows in Tirana, but if that’s what you’re after, you’ll definitely find it and all the corresponding winter sports, in the mountainous regions of the north.

A word of warning about the weather in Albania though. In winter, despite the mild temperatures, it can feel much colder indoors due to concrete construction, lack of insulation and poor heating. In summer, there can be rolling blackouts due to energy strains from an increased summer population.

It’s wise to remember that despite all its recent modernization, Albania is STILL a developing country, with a few kinks to work out.

Albania is a very inexpensive country to visit. It you’re on a real budget, for 30 euro, you could share a twin room, eat local food, and travel around using public transport. If you want to take tours, party the night away, stay in nicer hotels, or eat foreign food, you need to budget more. And if you plan to visit Dhermi or the Albanian Riviera during summer, you’ll need to budget a LOT more.

1
Have byrek for breakfast Byrek is a traditional flaky pastry packed full of meat, cheese or vegetables. It's delicious and filling, and can be had for $1 or less in various cafes and restaurants around Albania.
2
Travel by furgon Furgons are the mini-buses that most Albanians use to travel around. They can usually be found near any city bus depots. They leave whenever they're full. Don't be shy and prepare for a truly local experience.
3
Eat local food Food is generally vary affordable in Albania. Don't be put off by basic looking restaurants. Find the ones populated by locals, check out the menu and have a seat. Tipping is not required, but you can round up your bill.
4
Don't confuse the money About 60 years ago, the Albanian lek was appreciated 10 times, and you'll find that many locals still use the ``old`` system of counting money. Make sure you're not accidentally paying an ``extra zero`` for goods and services.

The Blue Eye in Albania is a magical place. Fortunately, it’s an easy day trip from Saranda or Gjirokaster.

These 6 day trips from Tirana reward with breathtaking natural sights, historical attractions, a dangerous road, and an Albanian hero… or two.

15 Best Things to Do in Durres, Albania + Where to Stay

A beach, boardwalk, Roman amphitheatre + so much more. Learn about all the best things to do in Durres in this complete guide.

If you’re a traveler who loves trailblazing through unknown territory, Albania’s a good place to do it… particularly outside of Tirana. You’ll have a blast simply trying to make yourself understood, since the Albanian language is, “unique,” to say the least.

However, if you have limited time, and would feel more comfortable with a little help navigating the language, culture and country, consider joining the following guided tours and activities. 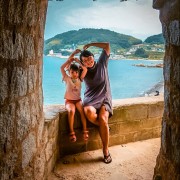