Gold and Caiprinhas in Salvador, Brazil

Brazil. When picturing Brazil I think of Rio, the Carnival, the revelries, the Christo overlooking pristine beaches, and crime ridden favelas out of the City of God. Or I think of the Amazon, deep untouched jungle threatened by extensive deforestation, and piranhas ready to nibble on my flesh.

Rio de Janeiro from up above

But the truth is that Brazil is a huge country, with numerous regions and vast cultural differences. It’s not really fair to pigeonhole it into just one of these iconic images. We’d heard from friends that Brazil was an expensive country to visit, so we decided to focus our finances and energy on Salvador de Bahia, Rio de Janeiro and Sao Paulo.

In centuries past, when Brazil was the biggest rubber and cacao exporter in the world, the region of Bahia and the country’s north was Brazil’s main economic center. Salvador was Brazil’s capital, a bustling city port where Portuguese ships docked to unload the slaves destined for the plantations, in return for rubber, cocoa and gold taken from the natives, as well as the wide range of exotic plant and animal species the beautiful Amazon had to offer.

The city was so wealthy that cocoa land owners are said to have lit up cigarettes with 500,000 reals bills (equivalent to US $247,000), and this was a century ago. Such wealth attracted many artists to the city. Painters, poets, musicians, all came here seeking better fortunes. Thus the city also became Brazil’s cultural capital, a title it still holds to this day.

As rubber and cocoa prices went south, so did Salvador’s wealth. The capital moved to Rio and then Brazilia, and though Salvador’s importance is nowhere near what it used to be, it’s past wealth is still visible throughout the town. It’s beautifully ornate buildings are some of the best Brazil has to offer and the churches rival the best in Rome.

We visited the colonial era San Francisco Church and Convent in the Pelourinho area and were overwhelmed by walls adorned with no less than 100 kilograms of gold. Every surface in the church, from walls to ceilings were covered by golden sculptured gilt woodwork and paintings. Though many find it beautiful and worthy of the glory of god, I found it very ostentatious and somewhat tacky. I presume the Portuguese had to write some of that gold off for tax purposes. 😉

The tourist sites are pretty enough, but what makes the city truly vibrant are it’s people. Whether of African or European origins, Salvadorians are very exuberant people, ready to sing or dance whenever the occasion presents itself.

Many years ago, food was distributed to the needy by the local parishes every Tuesday. Soon enough Salvadorians began to celebrate this, and turned it into a party and what a party it is! Tuesdays in Salvador are wild with performances on every corner of Pelorinho. From Samba shows on the main square, to tribal dances, and drum processions, thousands of locals and foreigners alike dance and drink to the wee hours. Nothing like I’d ever seen before. I could just imagine what it’s like for Carnivale!

Brazilians believe that Bahia (the region with Salvador as its capital) has the best folkloric music and dances the country has to offer. Dances like Capoeira and the Fire Dance evolved during slavery as a past time for the slaves. They are directly connected to West-African dances but they have taken their own twist.

In fact, the fire dance was a display of anger and aggression between two dancers holding machetes and smashing them to make loud noises. The dance was one of the only few ways slaves could put fear in their master’s heart. The Bale Folclorica company still performs folklore dances on a nightly basis and it’s a must see spectacle.

Salvador is also where I discovered the refreshing Caipirinhas, a cocktail of kashasa rum, lime and mint. This was one of my favorite drinks, and I sipped on one every time the opportunity presented itself, whether in bar or on the street, listening to samba or watching the drums show.

Oh Caipirinhas how I miss thee! 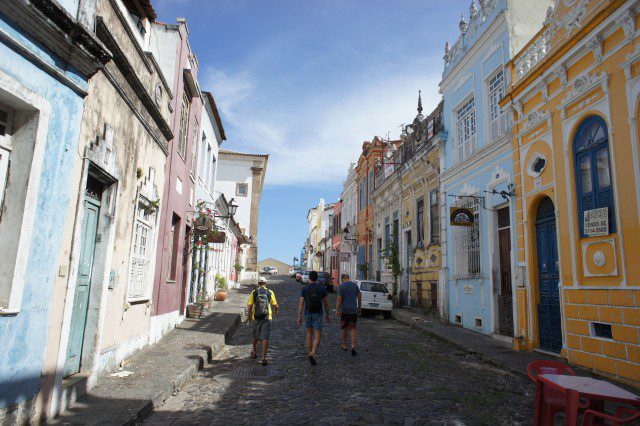