The Difference a Local can Make…in Brazilian Portuguese

Buying fresh coconuts on the streets of Salvador

When traveling the world, the inability to speak the local language is both a frustration and a pleasure. Personally, I enjoy hearing all the different and unfamiliar sounds around me. It’s a constant reminder that I’m somewhere foreign, new and yet-to-be discovered.

Of course, the flip side of the coin is that no one understands a word you’re saying. In new lands, the simplest tasks become difficult endeavours. Getting directions, finding out how to book train tickets or ordering food in a restaurant can turn into a dramatic interchange, with lots of babbling, gesturing and using of Google Translate (our saviour!)

In our weeks of travels through Colombia and Peru, we’d gotten off pretty darn easy on the communication front. With the Bear’s fluency in Italian, communicating in Spanish was a piece of cake. In fact, his accent sounded so authentic that he was sometimes mistaken for a local!

When we got to Brazil however, all bets were off. Sure Portuguese might be a Latin language like Spanish and Italian, but these words sounded like nothing we’d ever heard before. Brazilian Portuguese is a creature all it’s own, different even from what’s spoken in Portugal. Every word seemed to end with a nasally “ow” sound, and r’s were actually h’s. Imagine our confusion when people started asking us for “hey-ais,” the Brazilian currency. Why the confusion you might ask? Because it’s spelled “reais.” Yeah, we didn’t get it either.

Perhaps the ease of traveling in Spanish speaking countries had lulled us into a false sense of security and confidence, because in Brazil, we were totally paralyzed. We stood, staring dumbfoundedly in cafes, bus stations and restaurants, trying to decipher a word. Any word. I felt like a traveling rookie again…more than a bit intimidated by the unfamiliar world at large.

The beautiful buildings of the historic Pelourinho District

Fortunately, our hostel – the Nega Maluca – in the Pelourinho district of Salvador was one of those places with a great common area and chill out space. We met all kinds of characters there, including Javier, an aging Spaniard who had made traveling his life. Now 60, he’d been living in one place or another for the last 30 years, and was at the tail end of an 8 year jaunt through South America.

We also had the great luck of meeting Isaias, an outgoing and friendly Brazilian, transplanted from Sao Paulo to Salvador to work for Ford designing cars. Over a morning discussion about where to eat moqueca – a local fish stew – it was decided that we, along with Swiss couple Felipe and Anna, would venture out into the city streets of Salvador with Isaias as our local “guide”.

In front of the Barra lighthouse with Isaias

In Colombia, we’d already discovered the profound impact that traveling with a local can have on the quality of your experiences, when we tagged along with Felipe to Lucas’ Coconut Plantation, and this day would be no different.

Isaias’ knowledge of the local culture, foods and best of all, language gave us access to things that would’ve been otherwise undiscovered. He introduced us to great Brazilian foods like pastels (which we’d never heard of) and moqueca, and guided us onto the right buses when we took a trip over to beautiful Barra Beach.

Delicious shrimp pastels and a half finished caipirinha

Having a snack and more caipirinhas in Pelourinho

We were only able to spend one day with our new Brazilian friend, but in a strange way, his presence helped us get comfortable in a landscape that was, in truth, a bit daunting. Beyond that, he was able to provide cultural context and knowledge that made our experience of Salvador that much richer and more fulfilling.

Cultural exchange with Isaias outside the Nega Maluca Guesthouse in Salvador 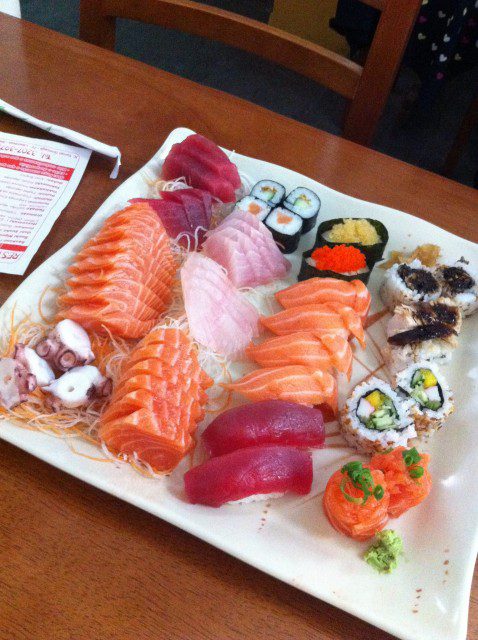