Family Travel: Our Worst Moments in 2016

If traveling as a couple has highs and lows, traveling as a family has Mount Everests and Grand Canyons. It’s as rewarding and exhausting as you imagine it’ll be, but the profound impact a little traveler will have on your exploration aspirations cannot be overstated.

We spent a good part of 2016 learning HOW to travel all over again, but no amount of forethought could’ve prepared me for some of the things we had to deal with on the road.

1. Changing an Epic Diaper on a Moving Bus in Japan (*Warning: graphic details to follow, so skip if you’re squeamish).
The whole diaper changing thing is not nearly as bad as I thought it would be. Most of them are handled easily, and there have really only been about 10 in Naia’s entire 16 months of life that have been really nasty. And of those, only 2 that I would categorize as truly epic.

One was the very first time our little one figured out how to have a solid poo. We were as surprised as she was, and let’s just say, it culminated with her dropping little brown torpedoes onto daddy’s foot while he watched helplessly. Hahahaha.

“Perfect in every way,” except for that poopoo

Daddy’s recovering with the biggest Asahi he could find

The other happened enroute to Kansai Airport on Naia’s first international trip. This was an eruption to rival Vesuvius, that was barely contained within the confines of her oh-so-inadequate diaper. And it could not wait until we arrived at the airport.

Imagine if you will, 2 parents trying not to kill all the other passengers using a powerful biological weapon, desperately trying to clean a 5 month old baby as the bus is weaving in and out of traffic. All I can say is, thank god, there was a bathroom on the bus.

2. Being Totally Unprepared on the Cinque Terre Hiking Trails
A 2km hike should be a piece of cake right? At least that’s what we thought when we set out on the trail between Levanto and Monterosso al Mare. Turned out we were dead wrong. And totally unprepared. No water. No food. No quarter given on a hike that was quite possibly the longest and most difficult 2 km of my life.

This was the easy part

Did I mention Agri was carrying our 8 month old baby in the ErgoBaby? In truth, she was probably fine, but knowing that did little to assuage our worry or our guilt. Talk about an unpleasant 6 hours. Yeah. 6 hours.

Putting on a brave face halfway through the trail

Rehydrating with a Peroni

Lesson Learned: Do your research, and always carry water. Period.

3. Sleep Regression in Europe
Did you know that sleep regression was a thing with babies? Yeah, me neither. But I found out all about it over our 3 months of travel in Europe, as our previously sleeping through the night baby shortened her sleep week by week by week, until she was only sleeping 3-4 hours at a time. At some points it was as bad as 1.5-2 hours at a time – an event that made this sleep deprived mama want to slit her wrists.

Maybe it was all the cappuccinos?

Haven’t slept in months, about to slit my wrists.

Yeah, I bet your sleepy

Falling asleep while eating gelato, really? Why not at night?

It turns out that some babies stop sleeping when they make cognitive leaps, and Naia was one of them. Add in the fact that I was basically sticking a boob in her mouth every time she started crying at night (you know, hotel rooms and disturbing other guests), and it was a recipe for total disaster. At least in the sleep department.

Lesson learned: Actually, there is no lesson. Besides accepting that parenthood means that you never get to sleep again. EVER.

Have you braved the world with a little traveler? Do you have horror stories? Please…please tell us all about them in the comments below. 😉 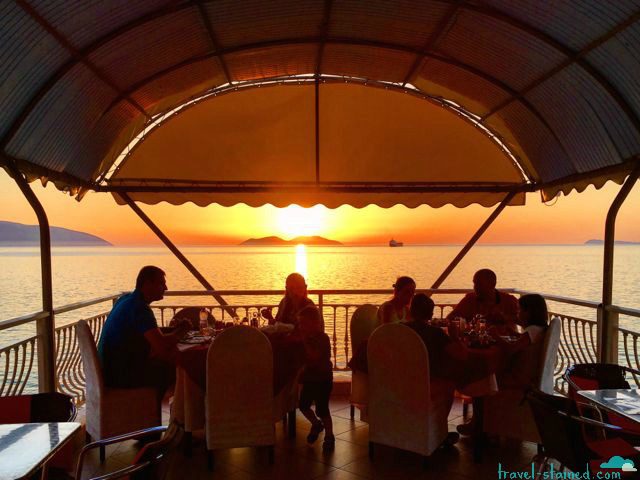