In 2017, for the first time, the Michelin Guide will publish a “foodies bible” for Seoul. It’s a sure sign of how much the food scene has changed and developed here in recent years.

As a long-time expat, I can attest to this fact. When we first moved to Seoul in early 2009, it was almost impossible to find a decent brunch, never mind a quality eggs benny. In the last 7 years though, I’ve happily witnessed an explosion of authentic international options – from Napoli certified pizza, to real cured Spanish jamón, to Vietnamese pho that doesn’t have red pepper paste as it’s dominant flavour, never mind all the homegrown trends and cutting-edge experimentation happening here.

From a culinary perspective, it’s a super exciting time to be living in this city.

And while it’s sometimes been frustrating to find unexpected corn kernels on my pizza, one big advantage of Seoul’s green foodie scene, is that it’s still possible to eat at a fine dining restaurant very, very affordably.

A modern interpretation of Korean seam

We’ve had the pleasure of feasting at Jungsik and Ryunique – 2 of San Pellegrino’s Top 50 Restaurants in Asia, world-renowned chef Pierre Gagnaire’s restaurant at the top of the Lotte Hotel, and now Edward Kwon-helmed Lab XXIV, for a fraction of what you would pay in any other modern developed country in the world.

Globally, Edward Kwon is nowhere near as famous as Pierre Gagnaire, but don’t tell that to all the Koreans that filled Lab XXIV when we visited last Sunday for lunch. It was busier than Jungsik, Ryunique and Pierre Gagnaire combined.

The entrance to Lab XXIV

Part of the totally full restaurant

And after eating there, I can’t say I’m overly surprised.

The service was amazing, the food was gorgeous and it was insanely affordable, with a Lunch Course Menu ranging anywhere from 39,000 won to 60,000 won depending on which entree you chose, and including amuse bouche, appetizers, soup (TRUFFLE CAPPUCCINO!), entrees, dessert, petit fours and coffee or tea. Tax included and no tipping required.

OUR MEAL IN PICTURES

Nope, you can’t smoke in restaurants in Korea

Everything was delicious, but taste-wise, the standouts for our meal were the sous-vide sea bream, which Agri demolished tout-suite, and the lemongrass ice cream dessert with white chocolate and a breakable mango jelly “yolk.”

We found the edible cigar filled with salmon tartare very clever, and tasty too, as was the Truffle Cappuccino which actually looked like a really large, really flavourful cappuccino (though it was a bit too much for me, and I had to pass it over to Agri to finish – can you imagine? Too much truffle!).

In the category of “how the heck did they do that,” was the salmon appetizer, where the fish had been transformed into pink salmon flavoured ice crystals. Huh?

Next time, I’ll be indulging in the full Tasting Menu. And there will be a next time.

Have you had a “molecular gastronomy” meal? What did you think of it? Do you live in Seoul? Which restaurants do you think will appear in the inaugural edition of it’s Michelin Guide? 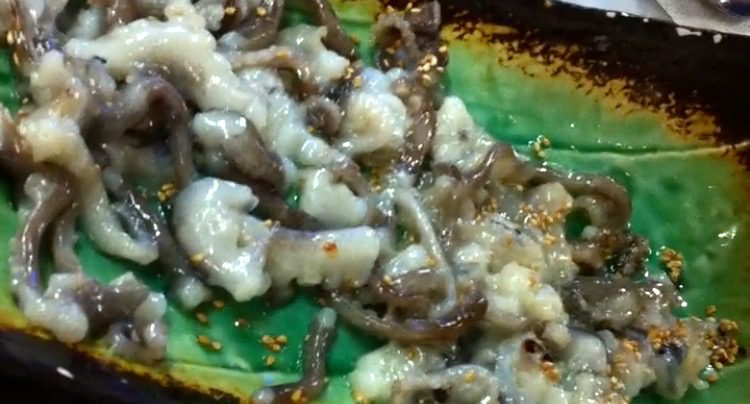