9 Wonderful Things to do during Chuseok in Seoul

Chuseok in Seoul is undoubtedly one of the best times to be in the city. The city empties out and the weather is close to perfect. In fact, Chuseok is one of the rare times when I actually CHOOSE to stay in the city, rather than booking a plane ticket to parts unknown.

Chuseok is one of the best times to stay in Seoul

In 2020, Korean Thanksgiving or Chuseok, lands on Thursday, October 1st. The public holiday dates for this year are Wednesday, September 30th to Friday, October 2nd, meaning everyone will have a 5 day weekend. National Foundation Day is also a holiday, but in 2020, it falls on Saturday, October 3rd.

Chuseok is an important time for family to gather together, so usually, that means gridlocked roads and a strangely empty city, as Seoulites head to their hometowns all over the Peninsula. It also means truly insane prices on flights out of the country, as more and more Koreans choose to take advantage of the extra days off by taking a vacation, instead of battling traffic.

Of course, 2020 is a total crapshoot, due to coronavirus, closed borders and increased social distancing measures all over the world. Health authorities in Korea have asked people to stay home, KTX train tickets have been reduced by 50% and no one will be traveling out of the country.

It’s hard to know exactly what Chuseok in Seoul will look like this year, but one thing’s that for sure, is that it’ll definitely be different.

These kinds of sunsets usually only happen in autumn

Seoul during Chuseok is usually quiet and serene in a way that it rarely is, but with most people unable to travel out of the country or city as usual, things could be different. If you do plan to wander around in Seoul (and it’s hard not to because the weather is pretty much perfect), be sure mask up, wash your hands, and practice social distancing as much as possible.

Things to do during Chuseok in Seoul

This list of things to do during Chuseok is gleaned from over a decade of living in the city. Some are special events just for Korean thanksgiving, some are free, and some are just way more pleasant to do without all the crazy crowds around.

*Note: many attractions may be closed or limited due to coronavirus this year, so be sure to check details before you go

See Seoul from above

With its crisp blue skies, and clear air, autumn is the best season to see Seoul in all its mega-city glory.

And my pick for the best birds-eye view of the city is from the Seoul Sky Observatory in Korea’s tallest building – the Lotte World Tower. During Chuseok in Seoul, there’s a chance you could even get pictures without other people in them.

There’s 7 different levels from which to take in the incredible views, but the 120th floor outdoor Sky Terrace is the highest outdoor observatory in the world. It sits at a whopping 486 metres high and you’re guaranteed a breathtaking unobstructed view of the city.

Tickets to the Seoul Sky Observatory are 27,000 won, and totally worth it. There’s simply no better view in the city. You can save 3,000 won by getting exclusive discounted tickets in advance here.

The Observatory at the N Seoul Tower also offers expansive views from its perch high atop Namsan Mountain at a much cheaper price. Get tickets on Klook for as little as 5,000 won.

Visit a Korean Heritage site for free during Chuseok in Seoul

If you haven’t ventured into one of Seoul’s historical sites yet, Chuseok is the perfect chance to finally go. Major royal palaces and tombs across the country will stay open during the entire Chuseok holiday. Best of all admission into all sites is free!

Look out for traditional performances across Seoul during Chuseok

There’ll be various performance and special events during Korean Thanksgiving, and you can participate in folk games at the different sites. You can also visit Jongmyo Shrine, which you can usually only visit with a reservation. It will be totally open to the public during Chuseok.

Be sure to rent a traditional Korean hanbok for the day. This is a must-do activity in Seoul with good reason. The pictures are a truly amazing souvenir of Seoul. I recommend reserving your hanbok in advance because even though the city will be empty, these sites will be a hub of activity.

READ NEXT: How to rent a hanbok in Seoul

My extended family and daughter rented hanboks to wear at Gyeongbokgung Palace.

Guarantee yourself a hanbok rental at any of the following locations:

Dine in Style during Chuseok in Seoul

A fine dining experience in a Seoul restaurant at dinnertime can be pretty darn pricey, as it is in most major cities around the world. At lunchtime though, prices drop significantly, for almost the exact same thing.

The problem is that most people are working during the week, and a lengthy lunchtime meal just isn’t in the cards. Not during Chuseok though. It’s a glorious day off for just about everyone, and the perfect chance to try out one of the city’s fancier food experiences, at a reduced cost.

Here’s a few fine dining options to check out:

Jungsik has locations in New York and Seoul, both with coveted Michelin Stars, and offers modern interpretations of Korean classics. 4 course lunch menus start at 73,000 won, which may seem expensive, but compare that to dinner which starts at 145,000 won for pretty much the exact same thing.

READ NEXT:  Eating at Jungsik in Seoul

Incredible octopus at Jungsik in Seoul

Lab XXIV is one of my personal favourites, because it offers delicious and clever molecular gastronomy course menus at an incredible price. From its new location in Gangnam, it serves lunch course menus including amuse bouche, appetizer, main, dessert, coffee and petit fours starting at just 55,000KRW tax and service included. Reservations are definitely recommended.

Is this the most beautiful dessert you’ve seen? Bonus points for being totally delicious!

The Garden of Morning Calm is a 30,000 square metre private garden, with 20 different themed sections, and 5000 different kinds of plants. It’s located just an hour away from Seoul in Gapyeong. It’s accessible by subway, meaning you won’t have to deal with potential traffic jams.

However, if you’d also like to visit Nami Island and Petite France while in Gapyeong, consider taking one of these guided tours, since there are no subways between these locations.

Peaceful vibes at the Garden of Morning Calm

While there, make sure to stop into MOAI Cafe for interesting architecture and strong coffee. It’s on the main road leading to the Garden of Morning Calm, and there’s no way you can miss seeing it.

Moai is a striking cafe near the Garden of Morning Calm

Go hiking on one of Seoul’s Mountains

Let’s face it, hiking the mountains close to Seoul is not always the peaceful communing with nature it should be. But during Chuseok, there’s a distinct possibility that you might have a mountain to call your own.

Both Bukhansan and Gwanaksan are reachable by subway and bus and may even be showing the first signs of autumn colour during Chuseok.

If you want to ensure yourself a solitary experience, head to one of the lesser known trails around Bukhansan, like Hyangnobong Peak.

Visiting the Russian district and trying some Uzbek food is one of the top things to do in Dongdaemun. It will be full of workers from Central Asia with real time off and missing a taste of home. The area will be bouncing with life and for certain, nothing will be closed during Chuseok in Seoul.

The restaurant my Uzbek friend Diana recommends as the best in the city is Fortune Cafe. Try the samsa – a seasoned lamb and onion filled pie!

Uzbek restaurants are guaranteed to be open during Chuseok in Seoul

Get Virtual at the Trick Eye Museum

If you’ve lived in Seoul for any length of time, chances are you’ve already visited one of the city’s many optical illusion museums. There’s multiple Trick Art Museums in the Insadong area, but the Trickeye Museum in Hongdae has upped its game, by adding Augmented Reality to its already eye-bending art.

On the red carpet, where they belong

By downloading a free app onto your phone, you can take video or pictures of yourself interacting with pandas, sword-fighting with skeletons or dodging sharks. It’s a ton of fun, and less people in Seoul during Chuseok should mean more space for you to get that perfect shot!

Helpful tip: download the app in advance and make sure your phone battery is fully charged. Save money by getting discounted tickets in advance here.

While there, make sure to Caface your own face onto a latte. 😉

Our #littletraveler's not sure how she feels about her face as latte art…especially since mommy's about to drink it up. 😂 * I've been wanting to @caface_seoul Naia for quite some time, and though I'm sad to say the coffee was completely overpowered by what they use to create the latte art, the gimmick was kinda worth it, and the 8,500KRW price tag. 😉 Once is probably enough though. Probably…

Get caught up on your reading at the Starfield Library

If books are your thing, the new Starfield Library in Coex Mall is not to be missed. It’s truly grand in scale, with 2800 square metres of space spread over 2 stories. Without a doubt though, it’s most eye-catching feature is 3 gigantic bookshelves stuffed with over 50,000 books and magazines.

Visit during Chuseok, or in the morning and you’re guaranteed a comfortable and inspiring spot to catch up on your reading.

The Starfield Library is worth visiting

Enjoy a blissfully empty city during Chuseok in Seoul

And finally, simply enjoy Seoul without gazillions of people in it. Wander the streets aimlessly without crashing into wayward Koreans. Eat in your favourite restaurants without waiting, and maybe, just maybe find silence in a cafe.

Are you staying in Seoul for Chuseok? What are your favourite things to do during Korean Thanksgiving?

Did you find this post about things to do during Chuseok in Seoul helpful? PIN IT! 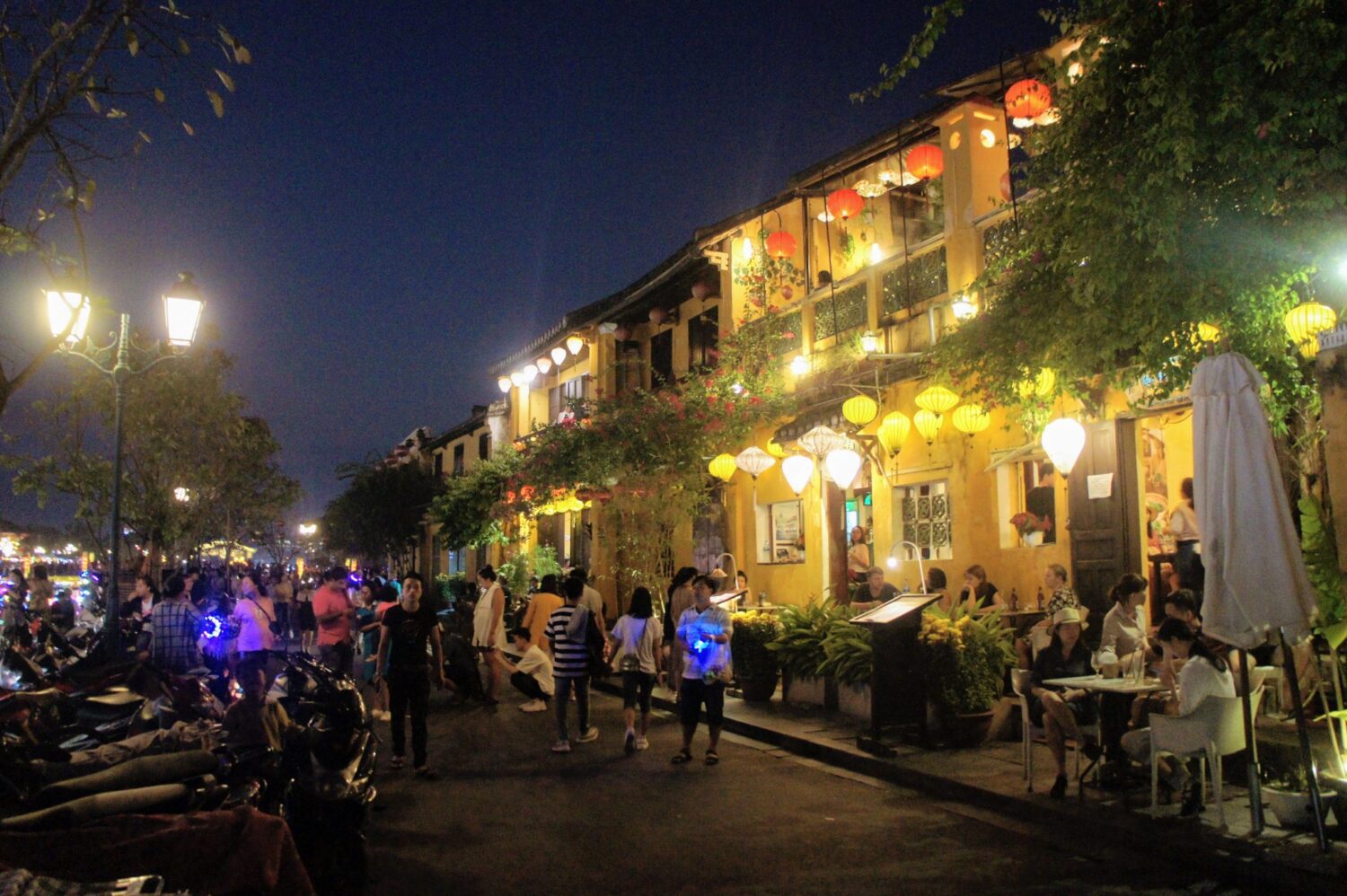